Roy is a playable character in the Brawl mod Project M. After being cut from Brawl, he returns with significant buffs. In Project M, he is one of two characters that were not originally playable in Brawl, the other being Mewtwo; in Project+, he is one of three, with Knuckles being the third. Roy was the first clone Engine character announced for Project M, based on Marth as he was in Melee.

Roy ranks 29th out of 41 on the official tier list, in the C tier. This is only a slight improvement in terms of tier ranking—in Melee, he is placed 21st out of 26, in the D tier—but balance in Project M is generally considered to be much better than in Melee, and Roy is far more viable and has significantly improved tournament results compared to his Melee version.

Roy maintains the same archetype from Melee, being a nimble fighter with relatively strong and fast attacks, an uncommon combination for a lightweight. He retains many of his attributes from Melee, including a fast dash, a fast falling speed (the same as the significantly heavier Donkey Kong), and an average air speed. As a swordsman, Roy's Binding Blade gives his attacks disjointed hitboxes, allowing him to carefully space between him and his opponents. Many of his attacks were heavily buffed in his transition from Melee, becoming stronger, faster, better for comboing, easier to land due to increased reach, and better for finishing. Roy's greatest change, however, is his drastically improved aerial game (which was arguably the worst in Melee). For instance, his sweetspotted down aerial is much stronger and now a spike as opposed to a meteor smash, and his back aerial is a powerful finisher due to its significantly increased knockback.

One of the biggest flaws Roy had in Melee was his inability to combo due to his difficult-to-land attacks. As a result of their poor hitbox placements, it was very easy for Roy to land his sourspots, which caused low hitstun. This has been well addressed in Project M, as his attacks are comparably easier to land and sweetspot as a result of their increased range. Because of this, they offer more hitstun than they did in Melee. Roy's improved aerial game greatly benefits his comboing game, as he can now link multiple forward aerials consecutively and rack up damage more easily than before, and his up aerial has been strengthened, not enough to make it a reliable kill move, but enough to make it more efficient at juggling. In addition, Roy also has a very good approach due to having one of the best SHFFLs in the game due to his fast falling speed, moderately high gravity, and low short hop, coupled with his relatively low traction, giving him an above-average wavedash length.

Roy's grab game is formidable. His up throw is the 9th strongest (10th if Olimar's is counted as two due to his purple and blue Pikmin being stronger) and has great chain grabbing potential against fast fallers. Additionally, Roy can force his opponent over to the edge and execute a good edgeguarding strategy by grabbing them, forward or down throwing them, and finishing them off with either his Flare Blade or side smash.

However, Roy is not without his flaws. He retains his disjointed hitboxes' primary flaw from Melee: the poor hitbox placements, as the tipper hitboxes of most attacks (neutral aerial and up smash are a few exceptions), retain their roles as the sourspots of his attacks, meaning that Roy is still forced to come up close to his opponents in order to be most efficient. However, because they are easier to land as a result of their increased range, this flaw does not adversely affect Roy nearly as much as it did in Melee. Roy's primary flaws, however, are his susceptibility to combos despite his light weight, due to his fast falling speed, which also exacerbates his poor and easily gimped recovery, his other major flaw. On the upside, Roy can aid his recovery by using his side special, the Double-Edge Dance, as the first hit grants him slightly more vertical distance and longer airborne time. Also, his fast falling speed enhances his vertical endurance, making him moderately difficult to KO vertically. Despite this, Roy's vertical endurance is only average relative to the cast (18th overall, which is relatively worse than in Melee) due to being lighter than many other characters. In conclusion, Roy can be considered a rush-down glass cannon like the space animals, because while he possesses devastatingly powerful attacks in his repertoire in addition to an effective combo game, his survivability is below average due to being an easy-to-combo lightweight with a lackluster recovery.

Regardless of his flaws, Roy has inherited a myriad of buffs in his transition from Melee, immensely improved his combo game and overall power, and thus becoming a more formidable fighter than he was before.

Roy has been heavily buffed from Melee to PM and has been reworked to be more of a semi-clone of Marth, rather than a clone, in terms of animations and attack functions. In addition, his buffs have increased his overall KO potential and made him become on par Marth as opposed to weaker.

The son of the lord of Pharae Principality, Roy was studying in Ostia when the Kingdom of Bern invaded League of Lycia. His father fell ill at this time, so Roy assumed leadership of Pharae's armies. After his fateful meeting with the Princess Guinevere, his destiny became inextricably linked with the fate of the entire continent.

Roy retains his costumes from Melee, with the addition of two new costumes, although they were touched up to match the more realistic environment of Brawl.

PMDT had confirmed on their Twitter account that Roy would have an alternate costume based off his appearance in Fire Emblem: Awakening in a future version of Project M. While it never made it into the mod officially, it was later released on the Brawl Vault.

Roy receives an alternate costume based on his appearance in Fire Emblem Awakening, along with recolors. 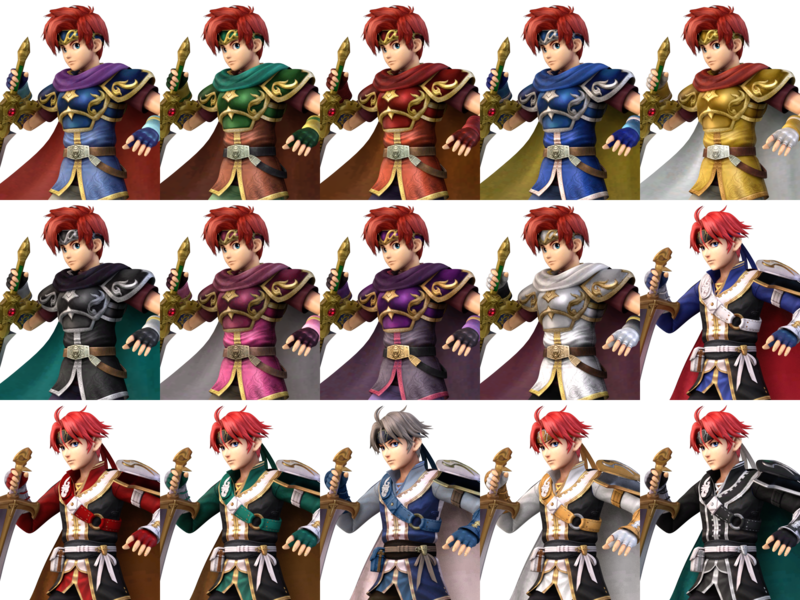