Mario is a playable character in the Brawl mod Project M. He is designed to be a mix of the best attributes of both his Melee version and Dr. Mario. He is currently considered a mid tier character, being ranked 20th in the latest official tier list and in the middle of the B tier. This is a great improvement over his Brawl placement of 31st out of 38, and a slight improvement from his Melee placement, where Mario ranked 15th out of 26. In Project+, Mario is ranked 16th on the official tier list in the A tier, a further improvement over his Project M placement.

Mario is average in most respects and very well rounded. He has a straightforward combo game that can transition well from the ground to the air, many options out of his throws, reliable approach options, and a solid ranged games with his fireballs and cape. While Mario is not the master of any one field, he is capable in all of them. Other characters may outclass him in speed or power, but Mario's overall well rounded set of attributes grants him versatility and the ability to take on most opponents.

Mario is endowed with a practical set of aerial attacks. His neutral aerial and down aerial serve as approaching tools, up and back can combo or gimp respectively, and his forward aerial is a great finisher. He is also capable off stage. His cape, quick aerials, and surprisingly good recovery allow him to head off stage and finish off opponents attempting returns of their own. On stage, Mario can be as much of a threat. His grab allows for chain throws, can lead into his deadly aerial combos, or can put the opponent off stage to set up a gimp. He can zone or approach with his fireballs, and has great finishers in his forward and up smash.

Despite his strengths, Mario still must cope with his lack of range and limited recovery options. However, the latter may vary if one takes into account all of the different ways that Mario can recover with his specials.

Mario was overall buffed from Melee to Project M, while still possessing balanced stats and average power attacks. Mario himself is now a slight mix between himself and Dr. Mario, with increased air speed, and moves like forward aerial and up smash acting like Dr. Mario's.

Dr. Mario appears as Mario's alternate costume. Players may switch between Mario and Dr. Mario costumes, similarly to Wario's alternate costume sets for his Wario Land and WarioWare appearances. This costume provides many aesthetic changes; Mario's Fireballs and their related sound effects in his neutral special and down taunt changed to that of the Megavitamins, his forward smash sports an electric effect and Dr. Mario's cape color matches the color used. No differences apply in regular gameplay from these aesthetic changes, but the changed elements will affect The Subspace Emissary and Boss Battles enemies. 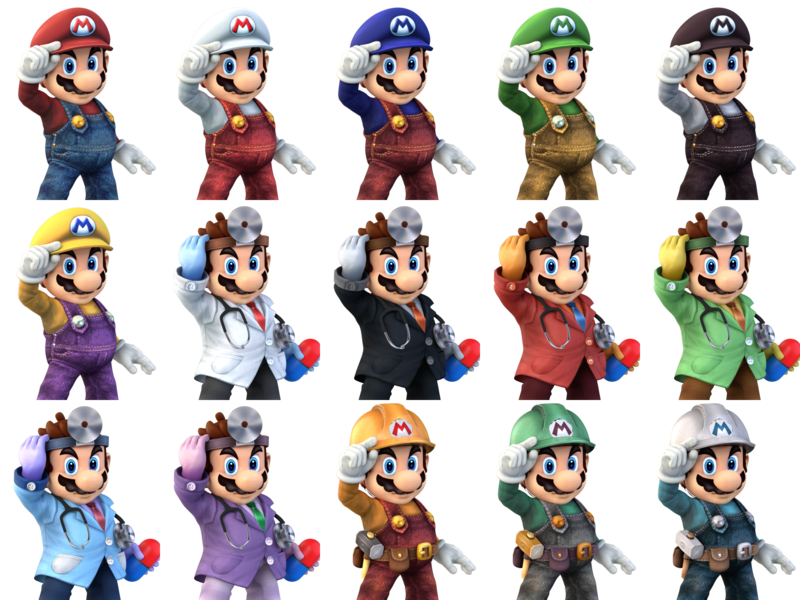