Marth is a playable character in the Brawl mod Project M. He was remade to be nearly identical to his Melee counterpart in terms of attack hitboxes and animations.

Marth has been mostly reverted to his Melee iteration, with a few buffs, such as a slightly improved recovery, a more reliable hitbox on his up smash, and less lag on his down aerial. He retains his strengths from Melee, such as his disjointed range, fantastic spacing tools, and great edgeguarding capabilities. However, he still must contend with the same weaknesses, such as his poor horizontal recovery, difficulty landing safely, and lack of a projectile or lingering hitboxes.

Unlike some other high-tier Melee characters, like Jigglypuff, Marth remains fairly viable in Project M, and is a strong pick for competitive play. Overall, though, Marth is less effective in the metagame due to the large amount of buffs other characters have received to counter the effectiveness of his tools. The tournament legal stagelist also works against him; while Marth only had some degree of disadvantage in Melee on Dream Land, Project M introduces similarly large stages that Marth struggles to KO on, while relegating his previously best stage, Final Destination, as a counterpick in most rulesets.

Marth was slightly buffed from Melee to Project M, receiving a few additional tweaks and fixes to some of his moves to make them more reliable.

His up smash was notably improved, with the tipper hitbox now properly covering the entire tip of the sword, and now having the ability to DACUS. His down aerial, previously a risky move to use on-stage due to its high landing lag, had its landing lag reduced, allowing it to be used more effectively as an out of shield option and combo starter.

His special moves also saw improvements. Dancing Blade's hits connect better overall due to the changes to stale-move negation and knockback stacking, Dolphin Slash is now able to grab ledges when facing away, and Counter has improved coverage and retains its ability to be wavebounced/B-reversed from Brawl.

Overall, however, aside from changes regarding mechanics and angle alterations, most of which benefit him, Marth remains relatively unchanged compared to the other top-tier characters in Melee.

Marth received small buffs and fixes in the transition to Project+.

For simplicity, if, for example, Marth's blade does 4% damage while the tip does 6%, and the attack has no other hitboxes, it is written as 4%/6%.

Marth once again uses his default costume when fighting on the blue team, so his blue costume was changed to purple. 3.5 included a set of alternate costumes based off Sigurd from Fire Emblem: Genealogy of the Holy War, which includes recolors for team battle.

The recolors of the Sigurd costume resemble other characters from Genealogy of the Holy War, specifically characters closely related to Sigurd:

Marth gets a new Hooded costume, along with its own set of recolors. The green hooded costume resembles Ephraim. He also gets back his original blue costume from Brawl. 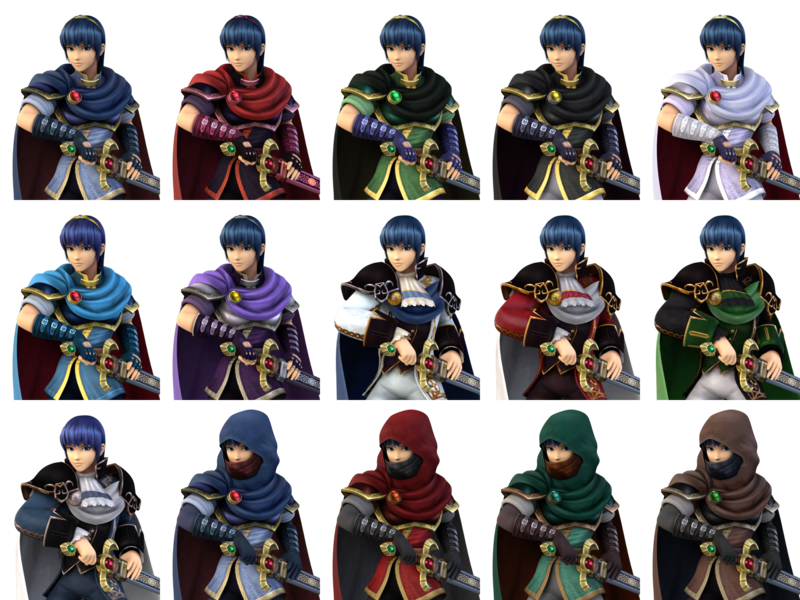 R-Secret Costume: Fire Emblem: New Mystery of the Emblem Marth (much like SSB4 and Ultimate)