Snake is a playable character in the Brawl mod Project M. He has been given new moves as well as a mix of buffs and nerfs for his Project M incarnation.

Snake ranks 12th out of 41, at the midst of the A- tier, on the official tier list, a small drop from his 6th-place position out of 38 on the Brawl tier list.

Snake is a fairly tall, heavy character with a wide array of projectiles and explosives. Many of his normal attacks are quick to start up and have well-placed, powerful hitboxes that lead into each other. However, his movement on the ground is only average, and in the air it is slightly worse (though his neutral special, if B-reversed, can help alleviate this). Snake excels at dealing high-damage combos, setting traps, juggling airborne opponents, surviving and recovering from incredibly long distances, and KOing foes off the top blast zone. He also possesses strong defensive tools, such as a long grab range, quick moves out of shield, a strong crouch cancel (due to his high weight) and a crouch that ducks under many commonly used moves. His primary weakness is his lack of reliable tools to approach opponents with - this means he can struggle against characters that are faster than he is, have longer-ranged attacks, can out-camp his projectiles, or have some combination of those things. He is also easily combo'd himself if the opponent manages to land a clean hit. Furthermore, while his recovery can travel very long distances, it is faily predictable, and he often has to inflict damage to himself through C4 or grenades.

Because the Project M metagame rewards defensive play much less than Brawl does, Snake's campy special moveset has received several new tools to keep it on par. His Grenades can now be rolled, and explode twice as quickly. Despite now being limited to one at a time, this allows Snake to use them more quickly and frequently without having to "cook" them first to prevent foes from throwing them back at him. Cypher now deals damage and knockback even while Snake hangs onto it, and although it is slightly less useful and safe for recovery, the move is now a very strong out of shield option due to its fast startup, weak knockback, and the positioning Snake gets after using it. His Remote Missile was replaced with Tranquilizer Gun, which launches a very small sleep-inducing projectile that, when hit, allows Snake to easily place C4 on an opponent. With its new buffs, C4 no longer transfers between players or disappears (unless it is detonated or Snake is KOed), and Snake can now fake pressing the detonator. The feint forces an opponent to dodge or shield in anticipation of the explosion, limiting their options and granting Snake an advantage. Overall, its buffs make it especially useful against evasive players: once the C4 is attached to Snake's opponent, he can use the feint or simply detonate it to break a stalemate at any range.

Snake's ground attacks received some adjustments oriented both toward combo potential and KO potential. His jab and all of his tilts keep enemies closer; in particular, the first stage of his forward tilt now weakly bounces targets straight up, allowing the move to rack up damage in succession and keep opponents close much more efficiently than his jab does. Meanwhile, his smash attacks were reworked for KO potential, with his down-smash mines receiving a substantial boost in knockback and his up-smash mortar no longer having a random, uncontrollable angle. Snake's new knife forward-smash, while seemingly more oriented toward speed than launching power, consists of two stages that both end in powerful strikes, allowing Snake to mix up shielding opponents by delaying or not using the second stage. While Snake's up- and down-throws received only minor tweaks, his forward- and back-throws, which still bounce the foe horizontally across the ground, now consist of mostly set knockback and are more effective at leading into a mine. Additionally, Snake's new ability to drag foes left or right during a grab can more advantageously position him to reliably throw a foe onto a mine.

Listed below are numerical values for many of Snake's attributes. The raw number comes first (often in terms of in-game units of distance or speed), followed by how it ranks among the 41 characters in Project M. Note that the grab range rankings do not include characters with tether grabs.

Snake received a mix of buffs and nerfs, with his buffs making him more suitable for the mod's offensive metagame. Snake's mobility for the most part has been considerably improved and he has various new tools he can use. His side special is now a tranquilliser gun which puts grounded opponents to sleep giving him many potential followups. His grab game is also even stronger. Snake can now walk around while grabbing his opponents allowing him to get closer to the ledge or his down smash mines. His down throw is also faster and deals more damage making it an even better tech chasing option.

As well as these buffs, Snake has also seen some nerfs. His weight has been reduced and he is much more vulnerable to combos due to the removal of hitstun canceling greatly hindering his endurance. All of his tilts are weaker and their notoriously large disjointed hitboxes have been considerably decreased. His aerials are also considerably weaker especially his neutral and down aerials. His Hand Grenades also take longer to spawn and he can only have one out at a time making them less effective as a defensive tool.

Overall, Snake buffs alleviate his nerfs and he overall remains a strong character.

Snake's blue costume from Brawl has been replaced with a more distinctive one, making it more noticeable on Team Battles. In addition, he now has a costume based off of his father, Big Boss, a.k.a Naked Snake, as he appears in Metal Gear Solid 3: Snake Eater.

Snake gets a set of costumes based on his appearance in the original Metal Gear Solid, as well as a costume where he wears a tuxedo. 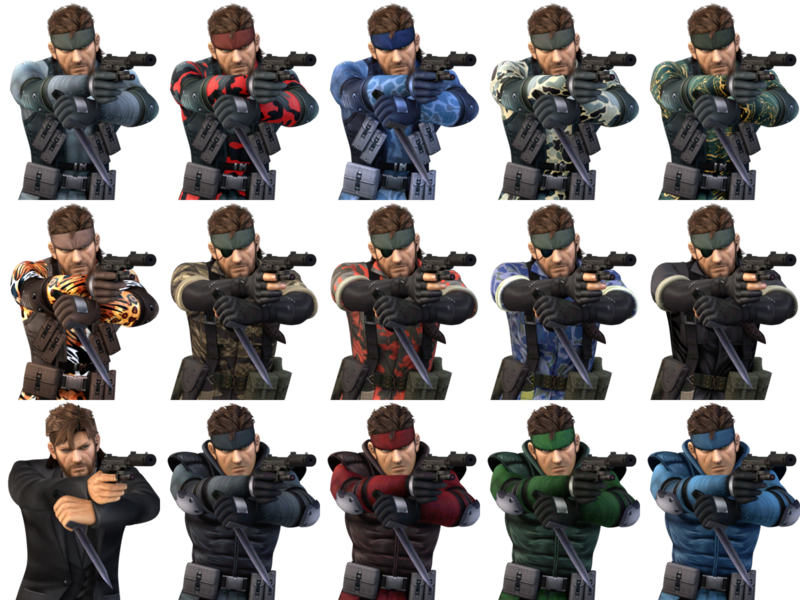