Link is a playable character in the Brawl mod Project M. He was remade to be closer to his Melee version.

Link is ranked 30th out of 41 on the official tier list, near the bottom of the C tier. This is an improvement over his placement in Brawl, where he ranked 35th out of 38, but a slight drop from his Melee position of 18th out of 26.

Link is, in general, a well-ranged fighter. He is a heavyweight (tied with Captain Falcon in weight) possessing three projectiles and long disjointed hitboxes in his sword attacks, allowing him to zone opponents out, heckle them from far away, and start combos from a distance before moving in. Both his Bombs and Boomerang can be used to create openings, which allow Link to start a combo or get in a finishing hit. Link's is also packed with a stellar defensive game, as his Hylian Shield can block projectiles when standing still, crouching (which aids his crouch cancel), and even while walking. His Spin Attack is also one of the most potent out of shield options in the game. The latter attack is also highly effective for edge guarding onstage, as it will semi-spike any opponent who fails to sweet spot the edge, sending them away towards the blast lines. Link also has a good aerial game; his up and down aerials are very powerful and stay active for a long time, serving as combo finishers, and his Bombs can be used efficiently for glide tossing. His other three aerials have low lag and decent range, serving as both combo and approach tools. His tilts are generally fast, especially his forward tilt, which can be quite devastating on those not expecting it; it is also a potent edge-guarding tool. His up tilt can combo into itself and/or juggle opponents, and his down tilt is also good at edge-guarding and can lead into combos at moderate percentages.

Link's smash attacks are of an above average speed, as well as being of the most powerful. His forward and up smashes are both effective at KOing and pressuring shields, with both leading into combos at low percentages to rack up damage quickly. Finally, his down smash is useful to KO any opponent at higher percentages. His up and down smashes both have incredibly fast startup, whilst the latter has somewhat moderate end lag.

Link's throws are of decent usage, as he is capable of using them rather quickly. His up and down throws can be utilized as combo starters, whilst the prior has immense knockback that could send the opponent into a possible KO at medium-high percentages. His forward and back throws, while sub-par to most, still have decent range at moderate to high percentages. When counting his now-fast grab, his throws are more dangerous than ever.

While Link's recovery is difficult to edge guard, it does not give much distance. However, with Link's glide tossing ability, Link's recovery has become one of the best in the game, as he can throw Bombs upward and use Spin Attack on them to receive knockback, allowing him to consistently repeat the process. Link has also an alternate recovery option with his zair, the Hookshot, which can also be used after shifting towards the stage with an air dodge.

Link is not a character without weaknesses, however. Link's large size, heavy weight and somewhat moderately high gravity make him an easy victim for combos, allowing enemies to rack up damage on him with little effort. His aerials, though possessing high KO potential, have overall long ending lag, save his F-air, B-air and N-air, causing Link to become easily countered by opponents that excel at midair combat, such as Jigglypuff or Peach. Also, while his recovery is overall difficult to edgeguard, his Spin Attack's hitbox only extends above him, leaving Link vulnerable against edgeguarding attacks with good horizontal reach, such as Marth's down tilt or Charizard's back aerial. His bomb recovery also damages him in the process.

As with most Melee veterans, Link was reverted back to his Melee iteration although he maintains some of the improvements he saw in Brawl and he has some additional new improvements to further aid him. Because of this, Link was heavily buffed in the transition from Melee, with many of his attacks being slightly faster, stronger and having improved range.

Beginning with 3.0, Link received an alternate costume based on his appearance in The Legend of Zelda: Ocarina of Time, which was the basis for his default costume in Smash 64 and Melee.

It received recolors that were present in Melee. Additionally, the Master Sword and Hylian shield were also changed to resemble how they appeared in Ocarina of Time.

In Project+ version 2.3, his classic costume was significantly revamped, better accurately representing his appearance in Ocarina of Time. The recolors were also revamped and have new references to other Zelda games: 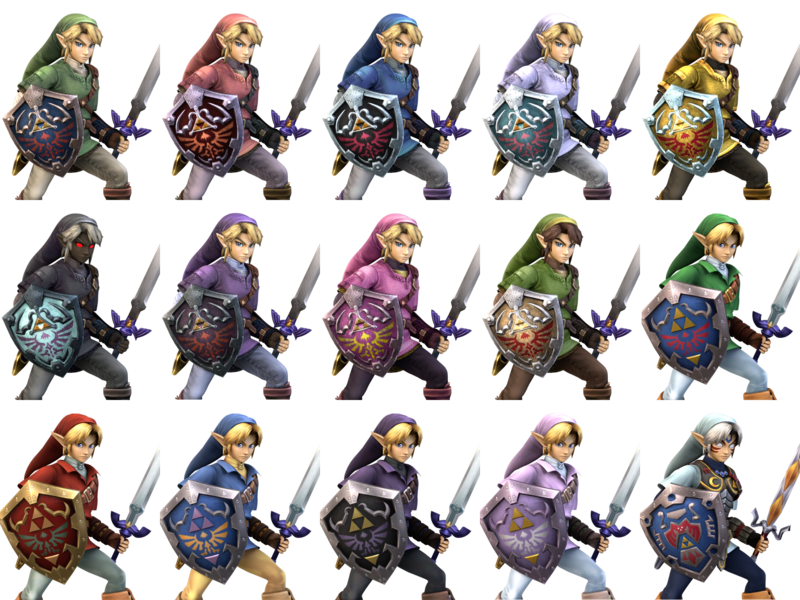