Diddy Kong is a quick, unwieldy fighter, able to rack up quick damage, combo well and make use of setups with his bananas. The ability to produce banana peels unlocks many techniques with Diddy Kong. The peels cause opponents hit by them or who walk over them to trip, making them fantastic tools for approaching, heckling, or setting up traps to extend combos. Diddy Kong can use his jab combo to transition into other moves or aerial combos. He is adept at gimping opponents with his refined Monkey Flip, his dash attack, and his down air. Peanut Popgun can now be used more liberally, as the gun shoots further and is stronger. Diddy's aerials are solid for comboing, and the same stands for his tilts and up smash.

However, Diddy Kong lacks ways to quickly and reliably finish off opponents. This can lead to opponents surviving much longer, and makes gimping opponents almost a necessity. In addition, his recovery options are somewhat limited. Rocketbarrel Boost flies in a mostly linear fashion, making it easy to disrupt for some characters.

Regarding item play, Diddy Kong has a ridiculously deep and distinct tool kit with which he can outwit his opponents.

Diddy Kong received some nerfs mostly noticeably to his Banana Peel which was the key part to his success in Brawl. Diddy can only have one banana peel out at a time and the changes to Tripping in Project M hinder their utility. Diddy Kong's endurance is also significantly worse due to his lower weight and he is much more vulnerable to combos due to his higher fall speed and gravity.

Besides the nerfs to his Banana Peels, he mostly gained noticeable buffs from Brawl to PM to fit with the Melee physics. His mobility, combo and edgeguarding game has been significantly improved and his damage output/kill power has increased. His grab game is also significantly stronger due to the physics changes as well as his up and down throws being altered. His recovery is also a lot better due to his higher air speed as well as having more options out of his side and up specials.

Overall despite his nerfs, Diddy remains a threat in PM's meta due to his buffs. He still remains one of the strongest characters in the game.

Diddy Kong's alternate costumes remain unchanged from Brawl, except for a new orange costume that makes him look like Funky Kong in the Donkey Kong Country TV series.

Project+ gives Diddy Kong several new recolors, as well as a hoodie for an alternate costume. 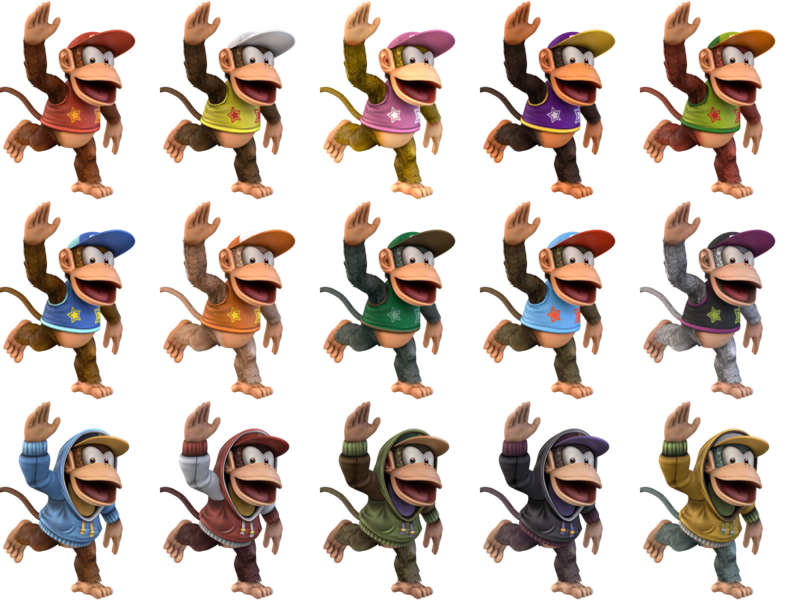