From SmashWiki, the Super Smash Bros. wiki
(Redirected from Fastfaller)
Jump to navigationJump to search

Not to be confused with gravity. 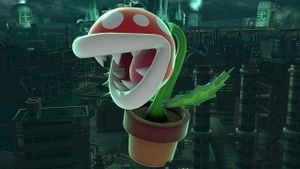 Falling speed is the rate at which a character can move downward in mid-air. A character's falling speed can greatly impact the fighting style - for instance, Fox, a fast-faller, uses his aerial speed to perform attacks out of a short hop and fast fall very quickly afterwards, whereas Jigglypuff, a floaty character, uses its low falling speed to attack multiple times in mid-air. Falling speed is measured in units per frame.

While falling speed's main effect is determining how quickly a character can drop downwards, it also affects the physics of knockback. After a character is launched, their gravity still applies, slowing their vertical ascent until the reduction equals their falling speed; as a result, characters with higher falling speed have their vertical knockback reduced for longer, improving their vertical endurance while also hampering their ability to recover from horizontal blows. However, weight is still the main factor in how much knockback is sustained in the first place, and the two factors are independent - a fast-falling character is not necessarily heavy, and vice versa. Samus and Fox are notable examples of this.

In Super Smash Bros. Ultimate, moves that launch at angles between 70° and 110° now instead cause characters' falling speeds to be homogenized to a set value of 1.8 until hitstun ends, making falling speed no longer play a major factor on vertical survivability; however, it still plays a factor on moves outside of this range, as well as moves which deal weight-independent knockback, as they ignore this effect.

All characters can also fast fall at any time during a descent to increase falling speed, so long as they are not in tumble.

Characters are generally put into one of two groups of falling speed: floaty and fast-faller, each of which have certain advantages and disadvantages depending on playstyle.

Fast-faller is a name that refers to characters with a fast falling speed. Fox, Captain Falcon, and King Dedede are prominent examples of fast-fallers, with Fox being unusually light for how quickly he falls.

Fast-fallers enjoy increased speed in the air and, in Melee, faster SHFFL'd approaches; however, they suffer from shorter recoveries. They are also susceptible to different combos from floaty characters. For instance, Captain Falcon can chain grab floaty characters with his down throw, but cannot do so against fast-fallers. On the other hand, he can tech-chase fast-fallers (or chain grab them given the right percents) with up throw, which he cannot do against floaty characters. Generally, fast fallers are more vulnerable to chain grabs and combos (although weight and character size are other factors as well); for instance, in Melee, Marth can chain his up throw on the space animals repeatedly and ultimately finish them off with a forward smash, but this combo is substantially less effective on a floaty character such as Peach or Jigglypuff (although, notably, this chaingrab does not work on fast-faller Captain Falcon, as he is too heavy).

Floaty is a name that describes characters with a slow falling speed. Jigglypuff, Peach, and Samus are prominent examples of floaty characters, with Samus being unusually floaty for how heavy she is.

Floaty characters have great benefits in terms of performing aerial attacks, since one would able to perform multiple aerial attacks in succession (such as Jigglypuff's slow falling speed and multiple mid-air jumps allowing it to do the wall of pain) and easier recoveries due to slow falling speeds allowing easier maneuvering. Downsides include vulnerability to being juggled, having easily predictable recoveries, or being KO'd vertically easily. On the flip side, floaty characters tend to be less vulnerable to chain grabs and combos.

When launched at an angle between 70° and 110°, all characters use a falling speed of 1.8 until the hitstun ends. This doesn't apply to weight-independent knockback, however.