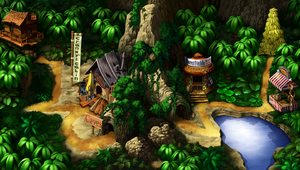 The overworld map of DK Island in Adventure Mode.

DK Island (DKアイランド, DK Island) is a sub-world found in The Light Realm within Adventure Mode in Super Smash Bros. Ultimate. It is located on the east side of the map. It is themed after the world map for Kongo Jungle in the original Donkey Kong Country. At the end of the path is this world's captured fighter, Diddy Kong. The area's background music is The Map Page / Bonus Level (Original).

The spirits found here are all from the Donkey Kong series. Spirits are ordered by when they are encountered in the sub-world.

The one shopping location in this sub-world, Funky Kong's Shack is unlocked once the player defeats the Funky Kong spirit battle. This shop tends to have spirits connected to vehicles or transportation.

The one captured fighter that can be freed within this sub-world, Diddy Kong, is found after defeating all spirits in the sub-world beforehand.