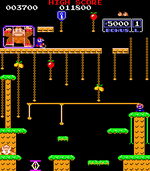 The spring made its first appearance in the arcade game Donkey Kong Jr. In the second level of Donkey Kong Jr., there is a purple spring that is used to get up higher to get on a platform. The design of the spring in Brawl and SSB4 looks very similar to its appearance in Donkey Kong Jr. The ability to pick up and throw the spring likely comes from Super Mario World, where players could pick up and move springs to access a certain area, but this did not damage enemies as it does in Smash. Interestingly, the sound the springs make when they spring is the same as the jacks from Donkey Kong that are mentioned in the Spring's trophy in Brawl. Although its design in Brawl is taken directly from the Donkey Kong series, topped with simple purple platforms, the Spring in Smash 4 has a more detailed design on top, directing characters to stand on it.

Originating from Donkey Kong Jr., the Spring propels a character skyward when jumped on. It can also land sideways, which causes anyone to bounce to the opposite side of the board. The springboard can be picked up and thrown, and when it comes in contact with other players, it will either deal damage or propel the character a certain direction.

Like the custom stage spring, if a character jumps on the spring while doing an attack, the attack will be canceled and the character will bounce up. Certain moves can be 'abused' by bouncing on a spring in this fashion, such as with Marth's Counter, due to it completely halting vertical momentum and causing him to fall straight on the spring again.

When thrown straight down, it causes the character who threw it to bounce off of it, restoring all of their jumps midair, as seen in this video.

Spring in Super Smash Bros. for Wii U

Spring
An item used to assist jumping. Jump on it, and it will send you bounding sky-high. You can also toss enemies onto it. It originally appeared in the second stage of Donkey Kong Jr., where it was used as a shortcut to leap to a distant platform. It resembles the bouncing projectiles that appeared in Donkey Kong, but those are said to be actually jacks, not springs.

Spring's trophy in Super Smash Bros. for Wii U

A strong spring that can send you flying higher than you ever have before. If you throw this down while you're in midair, you'll get a boost and sail even farther into the air! Try to be careful, though, since this spring may fall on its side and end up launching you sideways instead of up.

A strong spring that can bounce you higher than you've ever been before. If you throw this down while you're in midair, you'll get a boost and sail even farther into the air! Try to be careful, though, since this spring may fall on its side and end up launching you sideways instead of up.

Jump on this to jump higher than you ever have before! Throw it in the air, then land on it to jump even higher! Then use special attacks, or even do another jump in mid-air! If it's lying on its side, though, just bumping into it might be enough to launch you off the stage. You don't want that, so be careful!