Toad and Toadette are struck by Lightning in Mario Kart: Double Dash!!, shrinking them in the process.

The Lightning Bolt made its debut in Super Mario Kart and serves as the logo for the Lightning Cup. It can only be used by racers who are near/in last place. When used, it will summon lightning to strike the other racers, causing them to spin out of control and shrink. Shrunken racers have lowered top speed and can be easily knocked around or even flattened when getting run over. Since Mario Kart DS, the length of the shrinking time depends on what place each opponent was in when the item was used, with those at the back returning to their normal size instantly for much longer. 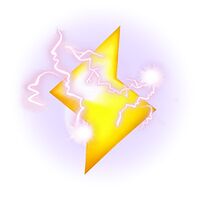 The Lightning Bolt debuted as a status item in Super Smash Bros. Brawl. When used, it will shrink every other fighter to tiny size, similar to the effect of the Poison Mushroom, reducing their attack power to 0.7x, making them lighter, and increase the amount of knockback that they take. However, it can backfire as well, shrinking the fighter who picked it up or causing the other fighters to become giant, similar to the effect of the Super Mushroom, causing them to grow to 2.4x their normal size, and their direct attacks will deal 1.84x their normal damage.

In Special Smash, these effects stack with Mega/Mini modes. Touching a Super Mushroom or Poison Mushroom will cancel the Lightning Bolt's effects.

Unlike most other items, the Lightning Bolt requires a character to simply make contact with it in order to activate its effect. Any character affected by knockback while being struck by the Lightning Bolt is still affected by knockback after the shrinking/growth effect occurs, similar to the occurrence with the Super Mushroom and Poison Mushroom.

The table below displays the damage multipliers that are used whenever players are turned tiny or giant by the Lightning Bolt. These values primarily apply to Super Smash Bros. 4 and Ultimate.

Lightning
An item that goes off the moment you touch it. It may shrink every other character on the screen. Tiny players suffer a reduction in their attack power and become easier to send flying. After a set amount of time, all the characters will return to their normal sizes. In the Mario Kart series, all players but the item user shrunk, and got flattened when run over.

The Lightning Bolt trophy appears in both version. In Super Smash Bros. for Wii U, it is part of the Super Mario Kart Trophy Box.

Lightning's trophy in Super Smash Bros. for Wii U

If there is one thing I've learned from Mario Kart, it's that lightning can strike without a cloud in the sky. Picking this up will hit your foes with a character-shrinking blast of lightning, making them really easy to launch into the distance. If you get struck, you'd best run until the fight is fair again.

Don't let sunny weather fool you! Lightning can strike at any time. This mighty force of nature can make you feel small...and actually make you small, too. In this state, you'll be quite weak and easily launched, so just try to stay out of everyone's way until you go back to normal. THEN you can get your own back!

While the Lightning Bolt itself doesn't appear as a spirit, its backfire effect appears as an ability on the Max Brass support spirit. The ability activates when the player is above 85% damage or below 35% health, but only once per match.