Uniras made their first appearance in the game Clu Clu Land. They are sea urchins that are stealing treasure from the underwater kingdom Clu Clu Land. They feature as enemies which damage Bubbles on contact; but they can be defeated by sending out sound waves to stun them, and then smashing them into a wall.

The Unira spawns with its spikes retracted; in this state it is harmless and can be picked up and thrown. Upon touching a surface or an enemy a thrown Unira extends its spikes, either clinging to the hit surface or falling to the ground if it hit an enemy. An active Unira has a slight vacuum effect and deals 10% damage and moderate knockback on contact; this does not affect the thrower. Hitting an inactive Unira with a strong enough attack will also activate it, while weaker hits will just make it slide harmlessly on the ground.

Hitting an active Unira hard enough makes it return to its inactive state; it can then be grabbed and thrown by any character. However, in Smash 4, the Unira is much harder to make it safe to use.

Unira
In Clu Clu Land, the Unira hid gold ingots in an underwater maze, then tried to stop Bubbles from getting them. In Super Smash Bros. Brawl, if you pick up an Unira and throw it, it will stick to the surface it lands on. Not only do its spines hurt, but it gently pulls in foes who stand near it. Once it's jabbed someone, Unira retracts its spines and can once again be picked up.

Unira's trophy in Super Smash Bros. for Wii U

What a cute little creature! You just want to... Oh, wait—those spikes aren't just for show! Once thrown or attacked, its spikes extend out and hurt anyone but the character who threw it. Attacking it again can make the spikes retract, so you could even throw it back at the original owner.

This blue ball's looks can be deceiving! When you throw or attack it, sharp spikes burst out and turn it into a real prickly nuisance! If you're the one who triggered it, though, don't worry – you're safe. With that in mind, stick it to a wall or ceiling in a narrow spot to really do some damage!

In addition to the above, equipping the Pitch, Smoky Progg, or Super Sea Snail support spirits will give the player a Unira at a start of their stock. 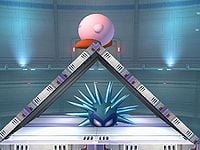 The Unira spiking up after being set.