Donkey Kong delivers an earth-shaking series of slamming-slaps to the ground, sending nearby enemies skyward. It has considerable power, consistent and repetitive damage, and a very large hitbox that can punish rolls very effectively. Overall, it does 10% damage when fresh in SSB, 11% in Melee and 14% in Brawl and SSB4. In the former two games, the move has set knockback, but from Brawl onwards it has high base knockback with low knockback scaling, preventing it from acting as an effective KO attack; the slaps also cannot harm airborne opponents, impairing the attack's ability to potentially combo into itself.

This move is good against bosses but only works on certain grounded ones. Prior to Smash 4, it was one of the few down special attacks in the Super Smash Bros. series that couldn't be used in the air, and in the original game, it was the only special move to do so. When used on a platform, enemies can also pass through the attack unharmed if they don't land on it, due to the attack using a specific type of hitbox.

An interesting note is that as long as one keeps pressing the special button after a hand slap, they do not have to hold down the control stick or d-pad for it to continue.

In the co-op mode of Home Run Contest, when used along a character performing a fast rapid attack, such as Ness with his down tilt, it can quickly rack up tons of damage (potentially over 300%). It is also used often by casual players to easily complete Multi-Man modes.

In Super Smash Bros. 4, Donkey Kong can now use the move in midair, causing him to slap down twice below himself. It does 11% and meteor smashes opponents hit with the second slap, which can, however, be difficult to connect. The grounded version of Hand Slap now also does plenty of shield damage, shattering full shields in 3 hits. 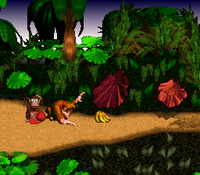 Donkey Kong using Hand Slap in Donkey Kong Country. The Banana Bunch next to him came out of the ground he slapped.

The Hand Slap originated in Donkey Kong Country, where Donkey Kong can use it to defeat enemies and to uncover items hidden into the ground. In the source games, however, DK hits the ground once with each hand each time. The animation from Smash 64 borrows from the original animation, where DK slightly hops and successively slaps both hands onto the ground. Starting in Melee, he instead alternates slapping the ground with each hand without hopping.