As its name suggests, Donkey Kong performs a headbutt. This attack can meteor smash an opponent if used in mid-air, or plow them into the ground, rendering them temporarily immobile, if used against opponents on the ground. Headbutt comes out faster in Super Smash Bros. Brawl than in Super Smash Bros. Melee. It can be utilized to break shields, especially so in Super Smash Bros. 4, where the move gains even more shield damage, capable of bringing shields to their final bar of health in one hit.

Headbutt is useful for setting up KOs. Trapping the opponent and then using a fully charged Giant Punch, down smash or side smash can result in a KO. This combo has a higher chance of working if the opponent has a medium to high damage percentage. The higher their damage is, the longer the opponent will stay stuck. This will not work in Melee, as nothing can dig out the trapped victim. Headbutt does 5% in Melee and 10% in Brawl and SSB4 when used on the ground. When used in the air, it does 10% in Melee and SSB4 and 14% in Brawl.

In Brawl, Headbutt can be used as a Cape glide, though it is slightly inferior to Mario's.

While most bury moves follow the traditional formula, Donkey Kong's Headbutt is one of the few that do not. Instead, it has its own formula, which changes based on whether it is an aerial or grounded variant.

In Ultimate, the formulas go as follows;

As a result of these formulas, it is possible to get 4 different kinds of mash frames given the 1v1 multiplier. However, Stale-move negation cannot affect it.

In Brawl, Donkey Kong's Headbutt can be reversed by tapping the control stick/d-pad in the opposite direction a few frames after the side special move has been activated, like Falcon Punch or Warlock Punch, but the reverse Headbutt has no increase to damage, knockback and has no reverse animation, unlike Falcon Punch and Warlock Punch. This makes reverse Headbutt nearly useless while staying still because it is possible to hit the button facing "away" from Donkey Kong along with the special button. It is interesting to note that when using a reverse Headbutt in Donkey Kong's running animation, Donkey Kong will turn around and slide forward a little while attacking. This is probably because the running momentum switches direction with Donkey Kong since there is no animation for the reverse Headbutt, which pushes him forward as if he didn't turn around at all. A reverse Headbutt combined with a Cape glide is very effective and can be used to surprise other players, Donkey Kong will receive the momentum to glide off the stage, but will then turn around and Headbutt while getting the same speedy momentum in the opposite direction. This results in Donkey Kong speeding off the stage, Headbutting and meteor smashing an opponent off the stage or one that has hold of the ledge, then returning onto the stage without using any jumps. 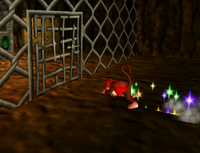 While Donkey Kong does not specifically perform any unique "headbutting" moves in his original series, headbutts do occur infrequently throughout the Donkey Kong and Mario games.