The move causes Samus to somersault into the air, surrounding herself in a bluish (yellowish in Melee) electrical field; inflicting damage on any opponents that touch her. The Screw Attack does cumulative damage and sucks opponents into the center. It is a useful out of shield option to counter attacks from above, as well as being Samus's primary vertical recovery move.

The Screw Attack used by Samus is different from the one used by the item. Samus' attack gives her a rapid boost upwards and briefly remains at that height before falling. The item attack, however, causes the character to slowly jump upwards and start falling immediately after reaching the top point. Samus' attack can only be used once before landing and causes helplessness, due to it being an up special move. The item attack, however, is an initial jump and midair jump, and does not cause helplessness. Lastly, Samus cannot use any other attack while using her Screw Attack, but aerials can be performed with the item attack to create powerful combos.

In Smash 64, the Screw Attack is a poor recovery move, gaining Samus fairly little vertical or horizontal distance. However, it is relatively difficult to edgeguard as it is very fast and has invincibility frame(s) in the first few frames of initiating the move. It is also a useful move in shield break combos, particularly against opponents standing on platforms above Samus. However, as with most similar attacks in the game, it is easy to SDI out of.

In Melee, the Screw Attack does not trap opponents very well, though it is still usable as a defensive move (similar to Bowser's Whirling Fortress). As a recovery, it tends to be avoided in favor of using the Bombs and Grapple Beam, but is still necessary for optimal vertical distance and notably gains more than it did in Smash 64 (though less if used while grounded), making it a more useful option. In the PAL version of the game, any charging of Samus' Charge Shot will be canceled if she is hit during this attack.

In Brawl, the Screw Attack regained the trapping ability that was weakened in Melee. A new and useful addition to this move is the increased knockback at the very end, making it a better defensive option since it's now safer on hit. The move has a few meteor smashing hitboxes due to the autolink angle, though they are always canceled out by the rest of the move.

In SSB4, the Screw Attack's recovery distance has been improved from Brawl and its knockback has been further increased, making it a viable KO move. Furthermore, it now combos out of Samus' dash attack (termed the "shinespark combo"), and can two-hit KO opponents with sufficient rage.

In Ultimate, the Screw Attack has been given multiple buffs that overall make it safer to use, most notably reduced startup and endlag, as well as several measures to make escaping the looping hits more difficult. However, due to the universal effect of toned down rage, the shinespark combo no longer works. The move also has the aesthetic change of a unique sound effect based on its home series counterpart instead of the standard "kick" sound effect. For the first time, Screw Attack is now shared between fighters, specifically Dark Samus. The only major difference is a different animation that makes the hurtbox smaller and harder to hit, giving it a slight edge over the regular version.

In version 9.0.0, both fighters' grounded Screw Attack were given slightly decreased vertical distance. This change was revealed to be a mistake and was reversed in version 9.0.2. 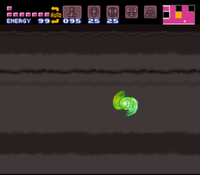 The Screw Attack as seen in Super Metroid.

The Screw Attack is an upgrade that Samus collects in nearly every Metroid game. Usually found at or near the end of the game, it is a passive ability that deals significant damage to any enemies that Samus touches while doing a spinning jump (as opposed to a purely vertical leap), and remains active until Samus lands. In most games, it can be combined with the Space Jump (allowing infinite consecutive jumps) for unlimited consecutive Screw Attacks, allowing Samus to travel through the air at will and destroy any enemies in the way with minimal trouble. In the Metroid Prime subseries, the Screw Attack is used after the normal jump and one Space Jump are used, allowing her to jump up to five additional times in order to cross large gaps, as well as wall jump up specific vertical shafts.