From SmashWiki, the Super Smash Bros. wiki
(Redirected from Aerial)
Jump to navigationJump to search 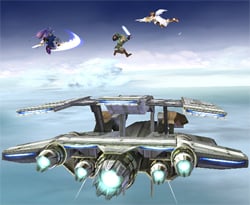 An aerial attack (空中攻撃, Midair attack) is any move that is performed in midair that is not a grounded attack or special move. Their official terms vary between titles; they are known as midair attacks in Super Smash Bros. Melee, and air attacks in Brawl, Smash 4 and Ultimate. Most aerial attacks deal moderate damage (9%-14%). Aerial attacks can be L-cancelled in SSB and Melee.

The types of aerial attacks are listed below, with a list of their typical uses:

in a direction and pressing