This article is about the protagonist of Xenoblade Chronicles 2. For the mech from Metal Gear, see Metal Gear REX.

"Rex" redirects here. For the smasher of the same name, see Smasher:Rex.

Rex (レックス, Rex) is the main protagonist of Xenoblade Chronicles 2. 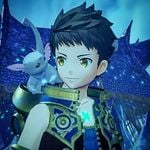 Rex with Azurda in Xenoblade Chronicles 2.

Rex was a 15-year-old salvager from Letheria who lived on a titan named Azurda, who he refers to as "Gramps." One of the salvaging missions Rex agrees to do is joining a team alongside Jin, Malos, Nia, and Dromarch and excavating the Ancient Ship, which Addam sunk underneath the Cloud Sea 500 years prior to protect Mythra from reawakening and losing control. During the mission, Rex accidentally touches the sword of the Aegis and is promptly stabbed through the heart by Jin. Just before dying, Rex's mind is transported to a memory of Elysium and meets Pyra, who requests him to take her to the real Elysium in exchange for bringing him back to life. Rex agrees and becomes a Driver, which are warriors that can wield Blades like Pyra. With their life forces combined, Rex is resurrected to Jin's surprise. Rex and Malos, Jin's second-in-command in the organization known as Torna as well as another Aegis, battle each other until Azurda rescues Rex and Pyra, as well as Nia and Dromarch, who defect to Rex's side.

The party narrowly escapes Torna, but Azurda is severely injured and is forced to revert to his larval form, which is small enough to fit in the compartments of Rex's clothes. While on this brief down time, Rex promises to Pyra that he will protect her and the Aegis at all costs. After that, the party begins to travel around Alrest on their journey to reach Elysium. During these adventures, Rex makes new allies in the form of other Blades and Drivers that share the goals of the party.

One of these adventures is a battle with Malos and Akhos, who completely overwhelm and injure the party. In one final effort, Vandham impales himself on the scythes of his Blade, Roc, to fend off Malos, but dies in the process. Enraged, Rex recklessly charges the attackers to get revenge, which forcefully awakens Pyra's alter-ego Mythra in a desperate effort to protect him. This effort works, and Mythra fends off both Malos and Akhos, reverting their Blades Sever and Obrona into Core Crystals, then immediately scolds Rex for pulling that stunt and forcing her to reawaken. After this fight, Pyra and Mythra gain the ability to swap places during battles, allowing more combat potential for Rex.

The party eventually confronts Jin on a mission to save Pyra, who was previously separated from Rex. The party is entirely defeated and the Aegis Sword is broken during the fight. Just before Jin takes Pyra away, he tells Rex that he is responsible for the pain Pyra and Mythra possess. After Rex is forced to retreat, he loses his confidence and contemplates giving up on his mission. However, he learns that a third Aegis Sword exists, and Azurda informs the party that he knows of its location. Once the third Aegis Sword is found, the spirit of Addam appears and says that Rex is worthy of wielding the Aegis and must carry the burden of Pyra and Mythra's fear of their own power. While failing to acquire the third Aegis Sword, Rex is able to locate Pyra at the Cliffs of Morytha anyway and the party goes to save her.

At Morytha, the party confronts Jin and Malos, who had absorbed the memory of Pyra to regain his powers. Rex fights most of this battle without the Aegis because he still doesn't have one. During the fight, Pyra and Mythra telepathically communicate with Rex and say that he should flee and leave them to die. Rex refuses, assuring them that he is still their protector and will take them to Elysium. This act of love allows Pyra and Mythra to unleash their full power, merging them together to form Pneuma, their ultimate form, and granting Rex the power of the Master Driver. Rex also gets a new uniform to match Pneuma. Rex and Pneuma overpower Jin, but Malos still puts up a fight. Subsequent events lead to the destruction of the World Tree. Pneuma instructs the party on how to save the day, but tricks them into fleeing the scene. Pneuma stays behind to sacrifice herself and dies in an explosion. Rex realizes what was happening and pleads to stay by her side, but is convinced to respect her decision and leave. However, after the world was reborn, the core crystal of the Aegis starts glowing. Pyra and Mythra then appear in different bodies, but it is left ambiguous if they retained their memories.

Rex appears as part of Pyra and Mythra's Final Smashes, where he aids them with their respective moves for the duration of the Final Smash; uniquely among assist characters in such a role, Rex's eyes will also glow when Pyra and Mythra have their Final Smash charged, as well as while assisting them in the attack. Rex also appears in their up taunts, on-screen appearance, and two of each of their victory poses. Unlike other taunts that spawn separate character models, Rex's model and animation in Pyra and Mythra's up taunts is completely independent of them, being unaffected by status changes such as Giant or Slow and persisting even when the taunt is canceled or they are attacked.

According to Sakurai, the development team considered having Rex fighting alongside Pyra and Mythra, but this was decided against due to the difficulty the team had with the Ice Climbers in contexts such as 8-Player Smash. Sakurai specifically cited the far more complicated design and abilities of Pyra and Mythra compared to the relatively simple appearance and moveset of the Ice Climbers.[1] Another issue was getting both characters to move at the same time which the development team found was impossible to do; similarly, it was deemed too difficult to implement Rex as the main fighter with Pyra behind him. This ultimately led to Rex being reduced to a smaller supportive role and Mythra being included along with Pyra with the two being able to swap instead.[2]

Rex was considered for the initial roster alongside other prospective characters like a character from ARMS, and Pokémon's Decidueye; however, he could not be added due to Xenoblade Chronicles 2 being announced after character planning finished in 2016. As an offered alternative, Rex appears as a costume for the Mii Swordfighter. Azurda (otherwise known as Gramps) in his miniature companion form appears in the set's outfit. The costume comes as a free bonus with purchase of the Fighters Pass Vol. 1.

Rex is seen in Pyra and Mythra's reveal trailer, searching for a seemingly missing Pyra. When he finds her on Final Destination, she reveals that she was chosen for Smash over him, much to his surprise. He later goes on to provide commentary in awe of Pyra and Mythra's fighting prowess and eagerly hops in to conduct their Final Smash.

In Adventure Mode: World of Light, Rex is presumably one of the countless spirits captured by Galeem during his takeover of the universe. After Galeem's defeat, Dharkon takes control of Galeem's spirits, including Rex. Rex's spirit is located in the Sacred Land sub-dungeon of The Dark Realm.

Originally, the Rex spirit had no additional effects. However, with the release of update version 11.0.0, Rex's spirit can be enhanced at level 99 into his Master Driver form from later chapters of Xenoblade Chronicles 2. This is the first time a spirit in the base game was given the ability to enhance, or had their ability changed in the game's postlaunch.