Peach lunges her rear towards her opponents after a stationary twirl, shouting "Ha-cha!"[1], and blasts them with a powerful explosion if it hits. In Super Smash Bros. Melee, the explosion is fiery, but as of Brawl, it is filled with hearts. Daisy Bomber is functionally identical, but has orange flower effects instead of pink heart ones, and Daisy shouts "Hi-yah!". 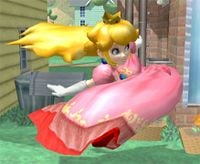 In Melee, the move deals 16% damage, but if a smash input is used, it deals 18% instead and more knockback.

Using the Peach Bomber on most walls in the game will cause Peach to rise upward slightly. This can help with recovery on stages with vertical walls, such as Yoshi's Story and Fourside. The technique can also be used to stall a match, as Peach can continue to bomb the walls, keeping her alive and out of range from most other characters who would be KO'd if they were to try to go and attack her. Use of the technique in this fashion is banned in most tournaments. 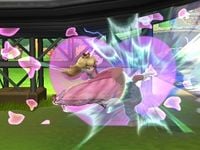 In Super Smash Bros. Brawl, the move now has an aesthetic heart-shaped explosion when the attack connects, rather than a normal explosion. It always deals 15% damage. This version of the attack covers more distance than in Melee, and can thus be used for recovery. It also has more horizontal knockback, rather than sending foes upward. Also, it can no longer be used to bomb walls for vertical height gain. However, if a wall is destructible, such as those in Shadow Moses Island, Peach can still rise a tad upward. There is also more start-up lag. The move now auto-sweetspots the ledge as well.

Peach Bomber in Super Smash Bros. for Wii U.

In Super Smash Bros. 4, the move has a faster start-up than in both previous games, as Peach executes the attack almost immediately without twirling first. It can also hit shields. However, it only deals 10% damage and has much more end lag, limiting its recovery potential. The move now leaves a trail of hearts. Its ability to rise on a wall is retained from Melee, to an extent.

In Super Smash Bros. Ultimate, the move deals 12% damage and more knockback, and deals more shield damage; it also has less startup and ending lag. The move's range can be extended by using a smash input when performing it.

The move appears to be original to the Super Smash Bros. series, as neither Peach nor Daisy have been seen attacking using their rear ends in a similar fashion in any of their appearances in the Mario series so far. However, it is very similar to, and may have been directly inspired by, R. Mika's Flying Peach from the Street Fighter series or Yuri Sakazaki's Big Butt Press attack from The King of Fighters. Additionally, the heart and flower effects during both variations of this move (which also appear in their on-screen appearances, as well as during various other moves) are common traits in several of Peach and Daisy's respective moves in spin-off games.