This article is about Mr. Game & Watch's neutral special move. For other uses, see Chef (disambiguation).

In Super Smash Bros. Melee, Mr. Game & Watch pulls out a frying pan with his left arm and tosses sausages, which fly erratically through the air. In later games, he can toss several different types of food. The projectiles do low amounts of damage, but they can be used to deter angled attacks. Up to five sausages can be tossed in one use of the move. The pan itself is somewhat more powerful, being a semi-spike with flame damage if the move is performed close to an opponent. If the player taps the special button repeatedly, the speed that Mr. Game & Watch tosses the food out will be increased.

This move is spammable, and is decent for projectile camping, despite its small range. This is because the foods are thrown very close to each other, and at least one will hit opponents that try to approach Mr. Game & Watch and cause hitstun. Even if the opponents do get through, they may be hit by the pan and sent backwards.

Normally, the food from Chef are physical projectiles, which means that they cannot be absorbed. However, if Kirby uses the move after copying Mr. Game & Watch in Brawl, the food can be absorbed.

Chef (Game & Watch) can be summoned using the cores of Chef (Personal Trainer: Cooking), Huey, and one support type. 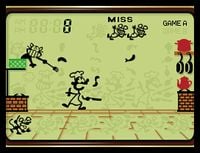 A game of Chef.

Chef is a Game & Watch game where the player takes on the role of a chef cooking various foods by flipping them with his frying pan. The player has to keep all the food airborne, lest it fall on the floor and either eaten by an awaiting mouse or be speared on a fork by a perched cat. To do this, the player flips it back upward with a frying pan, earning one point as a result. The player has three lives at the start of the game, and loses one life each time a food item hits the ground.