This article is about Sheik's special move. For information on the grab technique often called a "chain", see chain grab. 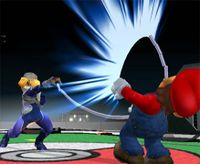 It involves Sheik pulling out a long metal chain and whipping it around. When Sheik pulls out the chain, the player has full analog control over it. The player can whip it in all directions - above and even behind Sheik's head. When a foe makes contact with the middle of the chain, they are slightly damaged. However, when the foe makes contact with the tip of the chain, they are given a small electric shock. It can be used to block solid projectiles like Link or Samus's bombs. In Brawl, the chain can act as a tether recovery, although inexperienced players randomly whipping the chain around can cause Sheik to immediately let go once tethered.

Due to the move's poor damage and lag, Chain is almost never used in competitive play. However, it is possible for the move to be used to stun opponents for extended periods of time, dealing significant damage to the opponent. Mew2King is known for performing this[1] on opponents on the ledge, often resulting in the opponent losing a stock.

There is also a glitch called the Chain Jacket glitch which affects the properties of the move's hitboxes.