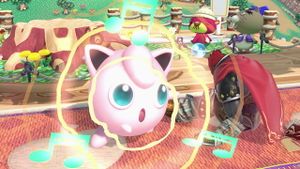 Being asleep (known as FuraSleep by the games' internal files, with "fura" being the Japanese onomatopoeia for dizziness) is a status condition in every Super Smash Bros. game to date, which is inflicted by attacks with the sleep effect. A character that falls asleep is prevented from taking action until waking up or getting hit by an attack.

Any fighter on the ground hit by an attack with a sleep effect will be put to sleep. In the air, characters cannot be put to sleep prior to Super Smash Bros. 4; from this game onward, a few sleeping moves are allowed to hit aerial opponents, namely Peach's Peach Blossom and the Hero's Snooze, in which case the opponent is instead put in an inactionable tumble state, transitioning into their sleeping animation if they land on the ground. The sleeping animation has a unique voice clip, which is more often than not the character snoring and occasionally sleep-talking.

Sleeping characters cannot take any action until waking up, though they can decrease its duration by button mashing, and it ends prematurely if they take any kind of knockback, or if the ground they are standing on disappears. As with other status conditions, its duration increases proportionally with the target's damage percentage.

In Super Smash Bros. for Wii U's Smash Tour, the tour item Darkrai causes an opponent to be asleep at the start of the battle. In Ultimate, the slumber floor Spirit Battle condition causes a stage's floor to put players (but not opponents) who stand on it to sleep. Conversely, the support spirit skill Slumber Immunity prevents the equipped fighter from falling asleep.

In the original Super Smash Bros., Jigglypuff's Sing is the only way characters can be put to sleep. The animation for sleeping characters is also the same as the animation for getting stunned, except the sleeping character flashes different colors, has musical notes around them, and uses a different voice clip to indicate being asleep, such as Mario using his snoring voice clip from Super Mario 64.

From Melee onward, all characters have a unique sleeping animation, as well as an animation for waking up. For example, Donkey Kong rocks on his back and puts his thumb in his mouth, and Fox curls up on the ground like his real-world animal counterpart. In Ultimate, Steve takes out a Bed from Minecraft and lies upon it, then breaks it and places it back in his inventory upon waking up. Sleeping characters also flash magenta, and emit stylized "bubbles" from their faces. In Melee, Mr. Game & Watch emits stylized Z's instead of bubbles; from Brawl onward, both the bubbles and Z's are shown.

In Melee only, Mario, Luigi, Dr. Mario, Captain Falcon, Sheik, Yoshi, Bowser, Ganondorf, Young Link and Mr. Game & Watch emit their stun voice clip upon waking up without being interrupted by knockback. Starting with Smash 4, most newcomers and a number of veterans also have a similar (albeit unique) voice clip, often being a gasp or a quiet breathe; in Smash 4, this applied to most voiced newcomers (with the exception of Rosalina & Luma, Greninja, Bowser Jr., Lucina, Dark Pit and Duck Hunt) plus Mewtwo; Ultimate adds all voiced newcomers from that game (minus Inkling and Ridley; including Daisy and Chrom, whereas their base counterparts don't have one), as well as Link, Young Link, Zelda, Ganondorf, Wolf, and the Mii Fighters.

As mentioned prior, the amount of time characters remain asleep increases proportionally to their percent, but can be reduced by button mashing from their part. Additionally, from Melee onward, characters have an animation for waking up that cannot be interrupted (known as FuraSleepEnd internally), effectively adding extra vulnerability time. This animation generally lasts 60 frames (exactly one second), though prior to Ultimate, it is different for a few characters; it lasts 50 frames for Mewtwo in Melee, 76 frames for Kirby and Jigglypuff from Melee to Smash 4, and a much shorter 30 frames for Squirtle in Brawl. In Smash 4 and earlier versions of Ultimate, the duration was either 59 or 60 frames for the rest of the cast, which was completely standardized to 59 frames since version 4.0.0 of Ultimate.

In Smash 64, sleeping works differently from every other game in that its duration decreases when the opponent is at higher percents, much like getting stunned from a shield break. Additionally, characters do not have animations for waking up, allowing them to initiate other actions immediately after their sleep duration ends. In this game, the formula for sleep frames is (300 - p) + 75, rounded down, where p is the character's damage percent after the sleeping move hits, and button mashing reduces this duration by 4 frames per input. This makes it more or less the same as the formula for stun frames, except with a lower base duration and reaching its limit faster (when the opponent has at least 300% damage).

In Melee, the formula for sleep time is 95 + 2p - 15h, where p is the same as in Smash 64, and h is a handicap equal to the victim's current rank disadvantage over the attacker (for example, if the victim is placing 4th and the attacker is placing 1st, it is equal to 3). As a result, players that are currently losing will be put to sleep for less time, and the minimum possible sleep time without button mashing can be 95, 80, 65, or 50 frames depending on their rank disadvantage. Button mashing reduces sleep time by 6 frames per input.

In Smash 64 and Melee, unlike with other status conditions, characters that are already asleep can still be fully affected by subsequent sleeping moves, resetting their sleep duration. While this has no practical use in Smash 64, due to the sleep duration being short and incurring no wakeup animation, in Melee, Jigglypuff can ledge-cancel Sing and repeatedly put an opponent to sleep if they are in range, allowing it to stall the match indefinitely. However, this is rarely seen in competitive play due to the extreme difficulty in landing Sing, as well as its punishability if unsuccessful. From Brawl onward, sleeping moves have no effect on characters that are already asleep, even during their wakeup animation, ensuring they can always shield and avoid immediately going into the status again.

Contrary to common misconception, Jigglypuff's Rest does not inflict the asleep status on it, and thus cannot be ended faster by button mashing; it is simply extremely high ending lag manifested through a sleeping animation.