A Gamyga (ギャムギャ, Ghamgha) is one of the members of the Subspace Army, and first appears in the Path to the Ruins level.

A Gamyga has a mask and four Gamyga Bases beneath it for support. It has one attack, in which it closes its eyes and shoots three multi-color lasers homing the player's position at the moment of firing, dealing severe knockback. Despite their immense power, the lasers can still be reflected or absorbed. Gamyga Bases have two eyes on their cylindrical surface with two small arms that flip every so often and don't deal any damage. Gamyga Bases will rotate as their health drops.

If the player destroys the Gamyga Mask directly, all of the Gamyga Bases will be destroyed along with it, regardless their current health.

On lower difficulties, it is easy to destroy the bases and then attack Gamyga's head. However, at higher difficulties, it becomes harder to do so as Gamygas fire their lasers immediately upon springing up. The Gamyga is temporarily stunned when the player attacks its head, so it is recommended that the player focus on the head and prevent it from getting a chance to attack. At higher difficulties, the flinch resistance becomes higher and higher. Falcon Punch, Warlock Punch, Judge (only on 9) and a fully charged Oil Panic can destroy all the bases in one attack. Gamygas can only be captured with Trophy Stands by striking their head with the stand; a trophy stand thrown at one of their bases will disappear no matter how much HP the base has.

While it doesn't appear as an enemy in Smash Run, there is a trophy of it in Super Smash Bros. for Nintendo 3DS. 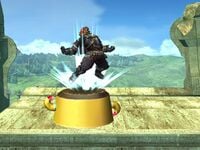 There is a glitch that occasionally happens when attacking many parts of the Gamyga at once. Sometimes, the player will destroy every part of the Gamyga, but the bottom base will be left on the ground, still wiggling, as though ready to attack the player (though it is unable, for the mask is the only part that attacks).

Gamyga
A Subspace Army enemy that looks like an avant-garde work of art from some young art-school grad. And its size is nothing to scoff at--sitting on top of a four-level Gamyga base is a huge Gamyga mask. You can eliminate the Gamyga base simply by beating the Gamyga mask. A Gamyga faces the screen, but it never takes its eyes off you. Ooh, spooky...in an artsy kind of way.

These tall, tower-like things first showed up as enemies in Super Smash Bros. Brawl. The head is really the main part of its body, with the other four components acting as bases. You could always take the head out first, but if you are height challenged, you can attack the bases first.

These tall, tower-like things first showed up as enemies in Super Smash Bros. Brawl. The head is really the main part of its body, with the other four components acting as bases. You could always take the head out quickly, but if you're too short (and you probably are), you can cut it down to size by chopping away at the bases first.