Isle of the Ancients

The island viewed from afar. 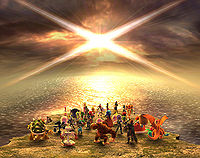 The "X" shown here in the credits sequence marks where the Isle of the Ancients had been.

On the island, there was one leader called the Master Robot. The other robots gave their unwavering loyalty to the Master Robot and lived in peace, but Tabuu took the entire island hostage. The Master Robot wanted to avoid losing so many of his brethren to Tabuu, so he reluctantly agreed to be the main front of the Subspace offensive and began development work on the Subspace Bombs.

The Master Robot then decided to disguise himself as the Ancient Minister out of shame for his own decision to work with the Subspace Army. The Dark Cannons were also being developed and built on the Isle of the Ancients. Samus's Power Suit was also kept on the Research Facility there, and Pikachu was captured and kept prisoner as a power supply. Additionally, Ridley was stationed there, but his role was unknown, though given Samus' Power Suit was held on the island, it isn't out of the question that he was stationed there in case she came to retrieve it.

When Olimar, Captain Falcon, Pikachu, Samus, Diddy Kong and Donkey Kong broke into the Subspace Bomb Factory, Ganondorf ordered that all the Subspace Bombs be detonated in order to create a portal large enough to fit the Subspace Gunship through. The Ancient Minister and the other heroes tried to stop the inevitable detonation, but ended up fleeing on the Falcon Flyer. Ridley, resurrected as Meta Ridley following his battle with Samus and Pikachu, pursued the Falcon Flyer in another attempt to vanquish the heroes, but they defeated him and escaped. The Isle of the Ancients was engulfed in Subspace, destroying the robots and leaving the Ancient Minister as the last surviving member of his kind.

In the ending of the game, the spot marked by the shining "X" is where the Isle of the Ancients had been. When Tabuu and the Great Maze were destroyed, most parts of the world were restored, but the effect of so many Subspace Bombs going off at once made it impossible for the Isle of the Ancients to return. However, the player can replay the Isle's levels after completing the mode.