This article is about enemies from Mario. For other uses, see Turtle (disambiguation).

The Koopa Troop, also referred to as the Turtle Tribe in Mario's character profile, is Bowser's group of minions that act as enemies in Super Smash Bros. Melee's Adventure Mode in the Mushroom Kingdom stage, and Super Smash Bros. Brawl's Subspace Emissary in Midair Stadium, The Jungle, The Lake, The Cave, The Swamp and The Great Maze.

In Melee's Adventure Mode, the Koopa Troop's members serve as basic enemies in the Mushroom Kingdom stage. Its members include Goombas, Koopa Troopas and Koopa Paratroopas.

In the Subspace Emissary, the Koopa Troop is personally led by Bowser acting under the banner of the Subspace Army. Its members attempt to take out the heroes and aid Tabuu with his master plan, but their efforts are ultimately foiled. The first member to be seen is Petey Piranha where he appears as the first boss at the end of Midair Stadium. The rest debuted when stealing Donkey Kong and Diddy Kong's bananas. There are six different members of the Koopa Troop in Brawl's Subspace Emissary. The trophies of the troop's members are collected by use of a Trophy Stand. 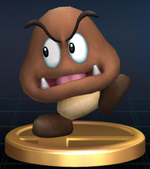 Goombas are the most common and basic members of the Koopa Troop. They are extremely weak, as they can be eliminated with a single jump, and cannot withstand many conventional attacks. They attack with charges. 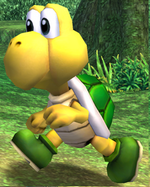 Koopa Troopas are the second most common members of the Koopa Troop, acting as basic cannon fodder infantry with the Goombas. They come in green and red variations, and when attacked enough or jumped on, they will withdraw into their shells, which can be thrown or kicked for the character's offense. They attack with headbutts.

Official artwork of the Hammer Bro in Brawl.

Hammer Bros. are members of the Koopa species, like the more basic and common Koopa Troopas, that are armed with an array of hammers, which they can throw. Unlike a Koopa Troopa, a Hammer Bro cannot be jumped on in Brawl, and must be defeated using regular attack methods. The Hammer Bro also appears as an Assist Trophy where it is completely invincible. 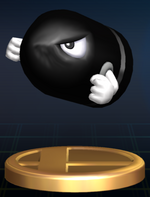 The Bullet Bill trophy in Brawl.

The Bullet Bills, while a living species, could be considered the machinery of the Koopa Troop, as they heavily resemble bullets, and they can be fired at any desired target to damage. While Bullet Bills can be defeated by attacks, they typically fly off of the screen boundaries by themselves without the need to manually destroy them. 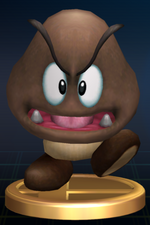 The Giant Goomba trophy in Brawl.

Giant Goombas serve as a more powerful version of the Goomba, as while they use the same methods of attack, these attacks inflict more damage, and have a higher chance of KO'ing. Giant Goombas will only be defeated after they have been jumped on three times, or taken more conventional attacks than a standard Goomba.

Petey Piranha is the only boss of the Koopa Troop included in Super Smash Bros. Brawl (Excluding Bowser). He appears as the first boss, holding the cages of both Peach and Zelda at the end of the Midair Stadium. Once a cage's health is depleted, it will break and free the princess inside while Petey catches on fire, collapses, and explodes. The unsaved princess will be turned into a trophy by Wario. At the last level, Tabuu resurrects Petey, along with the other bosses, and sends him after the heroes in The Great Maze.

Official artwork of Bowser in Brawl.