It needs mentioning on this page that the characters are figurines that are brought to life by Master Hand, unlike in Brawl, for example, in which the characters are trophies that are brought to life. I would add this in, but I don't know where it would go. Master Hand's page also needs changing along the same lines. PenguinofDeath 10:21, 30 May 2009 (UTC)

The aforementioned edits have been made. If anyone cares strongly/at all, feel free to change the relevant pages back. PenguinofDeath 17:05, 30 May 2009 (UTC)

Now, every character has his or her own SSB character page, whereas before they did not. However, many of these pages need work. Characters in need of a moveset: Luigi, DK, Link, Samus, Falcon, Ness, Yoshi, Kirby, and Pikachu

Characters missing a Combo/Stategy/Other Section: Luigi, Mario, DK, Link, Yoshi, and Kirby. Other issues or problems I found with each character.

Luigi-It is alright, but it should contain some strategies that Luigi players can use.

Mario-It gives some information, but nothing that a player couldn't discover in Training Mode by himself.

Link-To me it seems a bit short, more info should be added

Samus-Can be made more useful

CFalcon-To me that overview paragraph is too long and intimidating

Fox-Very good article (no bias coming from me making it >_>), maybe add attack descriptions and/or combos (depending on whether public opinion wants so) Pikachu-Moveset

Also, it would look better if all characters followed a single format. From what it seems, most of them are as follows: An intro paragraph/overview, a pros/cons list, a moveset, then Combos/Strats.

I think that Combo/Strats should be broken up. Then we can have an actual combo section, while strats can contain random useful info.ShoeThief 20:55, March 3, 2007 (GMT)

It's spelled with a C. 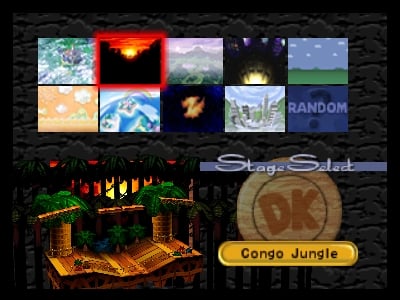 Went ahead and moved it. It made absolutely no sense for a section discussing changes made in a subsequent installment to be included in the predecessor's article. User:EPX2/sig 19:36, November 23, 2007 (EST)

Can someone make a list of characters that were supposed to appear, but didn't do to spacial issues. The only ones I know of are Peach and Bowser.--Aipom--

I would put it on both places.

I edited it. The only ones that are true are Dedede, Bowser, and Mewtwo (true as in "the only ones that have a source backing them up"). No evidence for Peach, Pit, or the others mentioned there.Sir Ilpalazzo (talk) 17:19, 1 April 2009 (UTC)

Pit was mentioned by Sakurai but was ousted for Jiggly. Can't remember wher though.

Pit was never mentioned by Sakurai (for the first Smash). I'm absolutely 100% sure of this, and that the three mentioned above were the only ones who were supposed to be in at some point (along with Sukapon). People keep editing the article to add those others back in, but there's no proof.Sir Ilpalazzo (talk) 17:19, 1 April 2009 (UTC)

I'm sorry for this, but I don't know how to cite sources here. These are the links that prove (as in - direct statements from Nintendo's sites and Sakurai) that those three were planned at some points (Sukapon was considered for Melee, not Smash 64, so I was wrong there).

I was wrong to have Sukapon there (perhaps a Melee trivia section is in order, there's definitely enough for that) but the others are right, and in all my searches through official materials, I've never seen proof for the others.Sir Ilpalazzo (talk) 17:19, 1 April 2009 (UTC)

According to that page (translated), the characters (in order) that were desired but didn't appear were...

It wasn't Giygas, the votes were for "Mother 2 characters" or something like that. It didn't refer to any specific character (like the vote for Pokemon farther down the line). EDIT: It was really Mr. Saturn.

Also, it was specifically Ash / Satoshi and not the game Pokemon Trainer that was voted for. Weird but worth mentioning.

No, this was a poll for who people wanted in the NEXT Smash game. (Melee) Not for who was considered in the original Smash, because in the full list, it has characters like Sonic, Megaman, and Crash Bandicoot. This poll was made before Melee was announced as well. Meowth and Pit were on the poll too, but they weren't in the top 20. (GoldenYuiitusin (talk) 00:51, May 19, 2010 (UTC))

Hyrule and Peach's castle appeared redone in Melee though it dosent say, and the Saffron City model has changed to the...unlockable earthbound stage...in Melee.

I'd be hesitant to consider any of those stages the same. The two castle stages both force completely different game play styles and the Earthbound stage is only like Safron insofar as it is on the tops of buildings. As for any other elements, they are completely different. Clarinet Hawk (talk · contributions) 00:20, 28 September 2008 (UTC)

It looks like, for the characters that had 3D models made for them prior to SSB, the character models used in game are taken directly from the relevant game. In particular, I've noticed Fox and Link look very similar to their models in Star Fox 64 and Ocarina of Time, respectively. If this is the case, then I'm pretty sure it's the only SSB game to do so; aren't all the models in Melee and Brawl unique to that game? Might be worth mentioning under Trivia.

I don't see how the models can be "copied". For example, Link's (SSB) sword does not look like the Master Sword, and his hands have no fingers. Toomai Glittershine The Stats Guy 18:12, 30 May 2009 (UTC)

Character articles for this game[edit]

I wasn't sure where else to put this, but, what exactly is the typical format for a character article of SSB? Looking around their articles, it's fairly random. --HavocReaper'48 19:30, April 25, 2010 (UTC)

Also, what of the images of the character's aerial attacks? The image is quite large. I'm working on Mario, but I noticed that picture on his article and others as well. --HavocReaper'48 19:50, April 25, 2010 (UTC)

To sign your posts on talk pages, please put ~~~~ at the end instead of manually typing your username. Dr. Pain 99

Should we add items to this page or do people have to just go to the items page to see all of the SSB64 items?

It can be done, but personally I think it's unnecessary. Toomai Glittershine

Should we perhaps edit the stage list into a chart, similar to what has been done on the Brawl and SSB4 pages? Ditto to Melee. (The preceding signed comment was made by Ghabulous Ghoti) 18:09, 10 January 2014 (EST)

There is no downside into doing so other than spending some effort.

Sign here if you always thought that the box said "Duke It Cut" instead of "Duke it Out" because the U was covering the O.

It has been brought up elsewhere that there's a decent case to move this to Super Smash Bros. 64, under the same rationale that we use to explain why we call it Super Smash Bros. 4. The main reason this page has never been brought up is probably just because it's never occured to anyone, or for grandfather clause reasons, or what have you. I'm not currently officially suggesting we move the page; I'm just casting out a feeler to see what people would think of it. Toomai Glittershine

Not only should this page not be moved, we should at some point soon make an effort to switch to using the "for Wii U/Nintendo 3DS" titles, considering the 3DS one will be out in a matter of only a few months. Miles (talk) 16:19, 26 April 2014 (EDT)

"As a relatively low-budget game with an unusual concept, there were not originally any plans to export the game outside Japan."

Odd enough, a voice clip of the English Announcer saying 'Jigglypuff' exists in the Japanese game's data. http://tcrf.net/Super_Smash_Bros.#Miscellaneous Should this be mentioned at all? --ComJay (talk) 09:11, 5 January 2015 (EST)

I'm not an expert or anything, but there are several things that could be going on here. 1. They could have been lying, who knows. 2. It could have been pulled from the files of a later version of the Japanese game. 3. They might have planned for a language selector to be in the game, as in Melee. 4. Some non-Japan native could have been put in charge of getting the voices, I don't know. or 5. They could have decided to port the game after overseas hype of the Japanese version BEFORE it was released. That last one seems like the most likely one to me. Buuuut, I have no way of proving any of this without further research. Anyone with some free time could probably figure this mystery out. Laikue (talk | contribs) 19:11, 5 January 2015 (EST)

I do see your point, but there's no good way to phrase it to make the difference clear, and it's also already covered on Yoshi and F-Zero by the fact that they note they are the only universes to be in all four games with only one representative. ---Preceding unsigned comment added by cupid♥. Or maybe DatNuttyKid. 19:55, 13 February 2016 (EST)

To a newcomer to the wiki who's trying to find this page and not the entire series, it might get confusing. I thought it might be helpful if we added (game) at the end of the title so it'd be a little bit more convenient. FinalSmashMan (talk) 00:05, March 15, 2019 (EDT)

I completely agree with you, but "Super Smash Bros 64." is not an appropriate name for one of the biggest articles on the site, a featured article. The period after the 64 rather than Bros is especially unfitting, and "Super Smash Bros. (game)" would be a much more appropriate title on the wiki. An article that is on the site's toolbar shouldn't have such a mess of a name. KungFuLakitu (talk) 16:29, May 1, 2019 (EDT)

Are you referring to adding "(game)" to the page's URL, or the title on the page? Although its not the "official" name, most people do refer to it as Smash 64 to differ from the series itself. The original Paper Mario is also commonly referred to as Paper Mario 64 for the same reason. Despite a lot of games released on the N64 having 64 at the end, not all games without the 64 are referred to as 64. Smash and Paper Mario just happen to some of them referred to as such. I believe it may stem from the fact that the next installment in the series was released on a different console. If finding the page is the problem, all the installments are always listed on the navigation on the left side of the Wiki under the Wiki's logo for that very reason. If we were to add "(game)", it would make more sense, to me, to add it to the URL and not the page itself. However, the series is already specified to be a separate page by having "(series)". Although it is weird how the period is after 64 and not Bros considering its after Bros in the title. Wolff (talk) 18:18, May 1, 2019 (EDT)

Mewtwo was supposed to be playable?[edit]

Unused content is already covered on this page, so I don't think Mewtwo being planned for Smsah 64 really belongs here.

As for the source you provided, the page is actually a poll where fans can vote for which character they want to see in a "potential sequel", and Mewtwo tied for 6th place with James Bond. For more information, I suggest you check this draft I made.