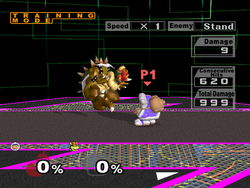 A screenshot of Melee taken after the freeze glitch was performed on Bowser. Note the number of hits.

Not to be confused with Freezing.

The freeze glitch is a technique unique to the Ice Climbers in the NTSC versions of Melee discovered by Philly Billy. It is caused by performing a grab with the trailing Ice Climber and then quickly using Squall Hammer with the leader. If done correctly, the opponent will be frozen in place and unable to do anything aside from take damage; the only way to free the opponent is by grabbing them or by throwing a Screw Attack at them.

The freeze glitch is banned in tournament play, as it guarantees victory if the Ice Climbers player performs it with a stock lead, and in the event both players have the same number of lives, the Ice Climbers can merely inflict damage on their helpless opponent to force a winning scenario. Since the freeze glitch also prevents the frozen character from performing any inputs and essentially stops gameplay for them, it can be considered an extreme form of stalling.

A similar glitch occurs if the leading Climber uses Squall Hammer while the trailing is being thrown. This causes the thrown Climber and the throwing character to be frozen.