The attack consists of Banjo crouching down while Kazooie shoots a Blue Egg forwards at a angle. Similarly to projectile moves such as Thunder Jolt and Mario's Fireball, the trajectory of the eggs fired during Egg Firing is affected by gravity. Eggs are weak projectiles that cause flinching. When using Egg Firing in midair, Banjo & Kazooie's falling speed is briefly reduced.

When the special button is held, the pair transitions into the Breegull Blaster (similar to the Super Scope). Banjo pulls Kazooie out of his backpack and holds her like a gun. Holding or mashing the attack or special buttons during Breegull Blaster causes Kazooie to fire eggs at twice the firing rate of Egg Firing; Banjo can still walk and jump while Breegull Blaster is active. The eggs fired from Breegull Blaster deal less damage than the ones from Egg Firing, with repeated hits causing the eggs to deal even less damage (with this damage penalty also stacking with normal stale-move negation). They also have shorter range, and they only move directly forwards without bouncing, but they travel faster and have vertical knockback at point-blank range that grants them combo potential into a variety of moves, including more Breegull Blaster eggs or aerials, and even a KO confirm into up tilt. Breegull Blaster can be canceled by shielding, crouching, grabbing, or performing a side, up or down special input.

'Turnaround Cancel Quick Storage', original finder unknown, is a technique that allows Banjo & Kazooie to land from an airborne Breegull Blaster, turn around without any lag from Banjo putting away Kazooie, and perform a combo using a fired egg. Normally, firing an egg in Breegull Blaster mode has 24 frames of endlag that prevents the duo from doing anything except moving or jumping. However, if Banjo lands on the ground while in this mode and fires an egg within 13 frames of touching down, the duo is able to turn around, canceling the 24 frames of lag, and allowing them to follow up with any desired action, usually a Wonderwing or forward smash if the egg hit an opponent.

Kazooie firing an egg in Banjo-Kazooie. 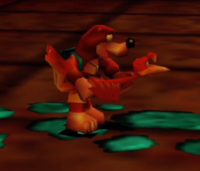 Blue Eggs are introduced in Mumbo's Mountain of Banjo-Kazooie as the duo's sole projectile attack. With Banjo crouching, Kazooie can fire up to three eggs at a time in a straight line forward, or in a bouncy pattern backward. Eggs are often fed into holes or other suspicious objects to solve puzzles, while they deal low damage to enemies. Various "addon" moves taught in Banjo-Tooie allow Kazooie to fire eggs in any direction across an infinite distance using first-person aiming, including while flying or swimming underwater, and also introduce other sorts of ammo types such as Grenade Eggs. Kazooie can carry up to 100 Blue Eggs at a time, though Cheato can double this limit.

The Breegull Blaster is taught in Banjo-Tooie's Mayahem Temple. Upon entering certain areas, Banjo automatically wields Kazooie like a shotgun, turning the game into a first-person shooter reminiscent of Rare's earlier title GoldenEye 007. Kazooie can fire eggs continuously in this mode. The game includes a multiplayer mode where four players can fight in the game's FPS arenas, playing as different characters with their own unique egg-shooting birds.