Banjo crouches down while Kazooie deploys an explosive Grenade Egg backwards. The egg bounces in a slightly unpredictable fashion before detonating on contact or on a timer. As an item, it can be picked up by any player, though this does not stop it from exploding in characters' hands. However, this property makes the move useful for bomb recovery. Only one Grenade Egg can be present at a time; Kazooie refuses to use another until the first has exploded. If the Grenade Egg gets pocketed, Kazooie cannot produce another Grenade Egg until the opponent who pocketed the Grenade Egg either gets KOed or pulls out the Grenade Egg and lets it explode. Grenade Eggs are fairly versatile projectiles with a variety of different uses, including zoning, camping, approaching, edgeguarding, ledgetrapping and comboing (the latter most of these including KO confirms into forward aerial and Wonderwing), and knowing how to properly utilize them (including picking up Grenade Eggs in midair in order to use them as items) is crucial to playing Banjo & Kazooie.

If a Grenade Egg detonates on contact with an opponent, the resulting explosion will not harm the player that threw it. It shares this trait with Young Link and Toon Link's bombs. 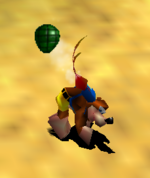 The manner in which the egg is deployed originates from Banjo-Kazooie, which can be performed after the duo learns how to fire eggs. If the player holds Z while pressing the up C button, eggs will be fired normally from Kazooie's mouth in a straight line. But if the player presses the down C button instead, Kazooie lays the egg behind Banjo, which bounces away along the ground. Eggs fired this way bounce slowly and with much variance based on terrain slope, making its utility very situational. Rear Egg is based off of the latter type of egg firing. The ability to pick up and toss Grenade Eggs created using Rear Egg in a similar manner to items in Smash also appears to be based off of the fact that eggs fired from Kazooie's rear end in Banjo-Kazooie can be picked up by simply walking or running into them.

Banjo-Tooie introduces different types of eggs aside from the standard Blue Eggs; Grenade Eggs are the third egg type. They explode instead of simply breaking on impact or distance expiry, dealing high damage and destroying many sorts of objects, but also hurt Kazooie if they explode too close. Kazooie can carry only 25 of them (though Cheato can double this limit). Grenade Eggs can only be fired one at a time and are mandatory for defeating several enemies and bosses. In the multiplayer first-person shooter mode, Grenade Eggs deal 4 damage (out of most characters' 8 health) and can cause friendly fire.