The attack is a thin, red laser that does a small amount of damage (normally 5%) and has decent hitstun. It can be angled up or down and ricochets off of walls and floors, though it will stop if it hits a wall head-on. The laser will penetrate any targets it hits for its lifetime. R.O.B. must wait 1 second for the laser to recharge, or else he will shoot a short-ranged burst that can only hit opponents at point-blank range. Despite its significantly shorter range, the uncharged version deals more damage than the standard Robo Beam.

When the laser is charged, the red light on R.O.B.'s head will begin to flash rapidly. Kirby also has this property when he copies R.O.B. There are actually two levels of charge: the aforementioned standard "charge", and the Super Robo Beam, which charges if the beam is left alone for 20 seconds. Super Robo Beam is much stronger and thicker and has increased range (enough to travel all the way across any stage), though it is significantly slower than a normal Robo Beam. If used at a very close range, the beam will do stronger flame damage, starting at 9%.

In The Subspace Emissary, R.O.B. Blasters use a purple Robo Beam, although it is shorter and cannot be charged. 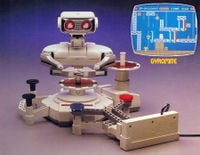 Robo Beam is virtually identical in function (including the ricochet) to the Laser copy ability from the Kirby series. R.O.B. has no relation to the Kirby franchise (outside of a guest appearance in Kirby's Dream Land 3), but this move is likely to have been an idea incorporated by Kirby creator and Super Smash Bros. director Masahiro Sakurai when putting together R.O.B.'s moveset. While the real-life R.O.B. toy never had the ability to fire lasers, the flashing red LED on R.O.B.'s head being an indicator of Robo Beam's charge is a throwback to when the red light flashed to indicate that R.O.B. was ready for use with the NES.