Pac-Man turns into his ball form and summons a blue trampoline that stays in mid-air. The trampoline can be bounced on by anyone two more times, with each subsequent bounce launching characters higher than the last, but a third time causes it to break and the user to become helpless. Should anybody other than the user jump off of the trampoline, their jump will be refreshed, had they already used it. The trampoline will also change color based on the number of bounces it has left (from blue, to yellow, then to red).

The move can also be used offensively: once Pac-Man bounces off the trampoline, he will begin to chomp, causing 5-8% of damage to anyone he touches until his jump reaches its peak. While the chomps do minimal damage and knockback, the move is a useful out of shield option, since the trampoline is spawned on frame 1, and instantly forces grounded opponents to jump (and thus technically makes the chomp unblockable against grounded enemies).

The red trampoline's breaking effect is the only way for 15 characters to enter helplessness. Those characters are Yoshi, Jigglypuff, Mr. Game & Watch, Snake, Ivysaur (in Ultimate), Sonic, R.O.B., Mega Man, Bowser Jr., Bayonetta, Banjo & Kazooie, Byleth, Min Min, Pyra and Kazuya. This makes it so that characters who did not have a helpless state in the previous game gain one, and by extension, makes Smash 4 and Ultimate the second and third iterations in the series to have helplessness for every character, the first being Melee when characters air dodged. 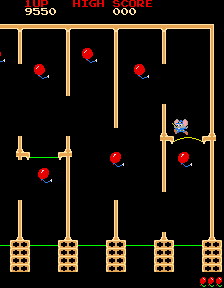 Mappy using trampolines in the bonus round of Mappy.

The trampoline is a reference to the 1983 Namco arcade game Mappy. In the game, there are several trampolines that start the game colored green. Every time they are bounced on, they change color to blue, yellow, and red. When bounced on when red, the trampoline breaks apart, killing Mappy in the main game and leaving him helpless in the bonus round (unless there is another trampoline below the broken one). The trampoline in Pac-Jump goes through these colors in the same order, but starts out blue since Pac-Man immediately bounces on it once it appears.

Unlike its depiction in Smash, where the height gets progressively higher with each jump, the trampolines in Mappy can always launch the player as high as they wish, leaving it up to them to decide what floor to land on.