Header (ヘディング, Heading), known as Heading in the PAL version of Smash 4, is Wii Fit Trainer's side special move.

Wii Fit Trainer jumps up and headbutts a green soccer ball, making the ball travel on an angled trajectory downward. The ball can be hit early by pressing the button again, which changes the angle it is hit at. In Ultimate, Header's angle range was greatly increased, the ball was made significantly larger, and its physics were altered to make it much heavier. In Smash 4, the ball deals 7% damage if it directly hits the opponent before touching the ground. Once the ball has bounced, contact with it will deal 6% damage. In Ultimate, the ball's damage fluctuates from ~8.8% to ~12.3%, although it still seems to get weaker after it bounces. If the opponent is directly in front of Wii Fit Trainer when the ball is being headbutted, they will be hit twice: once by the headbutt, which causes 15% damage with a clean hit and 10% with a late hit in both games, and the second time by the ball. This results in both heavy damage and shield damage. The headbutt also serves as a strong meteor smash with a large hitbox. Wii Fit Trainer can cancel Header before hitting the ball, causing them to fall into their helpless state. The ball will fall to the ground and bounce once or twice before disappearing. During this time, it can be hit by Wii Fit Trainer or an opponent to send it flying in various directions, acting like the Soccer Ball item albeit with less power.

While being an awkward projectile to use on the ground at point blank range, Header is a useful tool at mid and long ranges, the edge, and especially offstage. In addition to stalling and giving Wii Fit Trainer a boost in height once activated, it is also a fantastic edge-guard breaking tool as the angle the ball flies is perfect for hitting a grounded opponent while offstage. Opponents have to shield or get hit by the ball if they try and edgeguard Wii Fit Trainer, and they also risk getting hit with the meteor smashing headbutt if they try and interrupt the move. As such, it is a relatively safe option to help Wii Fit Trainer get back on stage. With its ability to be cancelled, it can also be used to cover opponents' various recovery options; this is especially true in Ultimate since air dodges are a lot more risky offstage.

Header has several different techniques and applications aside from simply heading the ball, and these make up a large part of Wii Fit Trainer's more complex options and tools.

An example of Header cancel Jab 1.

If the player presses shield at any point in Header's startup, the move will be canceled and Wii Fit Trainer will go into free fall for a short period of time. This leaves the ball bouncing in place directly next to Wii Fit Trainer, in prime position to be hit by any of her other attacks. This tech has a massive variety of uses due to the fact that the ball can be sent in virtually any direction and at several different speeds. As such, Header cancels (often abbreviated to "HC") can be used to edgeguard, cover options, create traps, set up kill confirms, or just simply create mixups and keep the opponent guessing. Although the soccer ball's physics were changed quite a bit from Smash 4 to Ultimate, the applications of Header cancels have remained more or less the same across both games (albeit slightly more effective in Ultimate). The primary downside to Header cancels is the fair amount of start-up time required to put one into action, especially since the player is completely helpless for a short period due to Header cancels causing free fall. However, this can be remedied somewhat by fast falling once in free fall.

Punishing Metaknight's forward smash on shield with and without header cancel shield.

While Header cancels are typically thought of as an offensive tool, they can also be used defensively in some cases. If the player performs a Header cancel and then holds shield with the ball bouncing harmlessly next to them, they able to punish most shielded attacks much more easily. This is because the opponent's attack will hit both Wii Fit Trainer's shield and the soccer ball, which then itself hits Wii Fit Trainer's shield. Since the ball has such a low amount of shieldstun, it negates most of the shieldstun from the opponent's original attack. In addition, hitting the ball keeps the opponent in hitlag for much longer than usual, giving Wii Fit Trainer a further frame advantage. As such, Header cancel shield is a powerful defensive option, allowing Wii Fit Trainer to easily punish almost every shielded move (as long as it isn't a shield breaking attack). This tech is especially useful in Ultimate since out of shield options are generally less potent.

An example of headwhiff dair.

Formerly known as Header Momentum Exploit (HME), headwhiffing can be described as a method of Header canceling in the air without going into free fall. Just like Header canceling, headwhiffing places the ball right next to Wii Fit Trainer, ready to be hit by a different attack. To perform the tech, Wii Fit Trainer must first be launched by a strong attack. Once this has happened, the player must input Header immediately out of hitstun. If the knockback Wii Fit Trainer has received is sufficient, she will miss the ball with her headbutt due to her momentum. From here, the player can follow the falling ball and hit it with an aerial or even Super Hoop. The most notable use of this tech is headwhiff dair, which sends the ball almost straight down and as such can be used to cover Wii Fit Trainer's landing. The downsides to headwhiffing are its notable start-up time and its expenditure of Wii Fit Trainer's only Header use until landing. However, the start-up time becomes a nonissue if the tech is used extremely far off or above the stage, as it usually is.

An example of Header getup.

This tech adds yet another powerful tool to Wii Fit Trainer's on-ledge arsenal, allowing the player to get onstage while using Header and then act almost immediately. To perform this tech, the player must drop from ledge and immediately double jump instant Header while holding towards the stage. If performed correctly, Wii Fit Trainer will land immediately after hitting the ball with very minimal landing lag. While this tech was technically always possible in Ultimate, it only became a powerful option in update 3.0.0, where Header's spawn mechanics were changed to cause the ball to be sent at a sharp angle when using the tech, effectively covering the ground in front of Wii Fit Trainer. There are a variety of combos and kill confirms stemming from this tech if the player lands a hit with it. The downside to Header getup is its startup; while it doesn't take that long to perform the tech, it is possible to be intercepted if the opponent suspects the player will use the tech. If this happens, the player will end up offstage without a double jump, which can be difficult to escape from unscathed.

Due to the change in Wii Fit Trainer's soccer ball spawn mechanics in update 3.0.0, Header's trajectory can be manipulated somewhat. If the player runs to the edge of a stage, pivots, and immediately uses Header in the stage's direction, the ball will spawn behind Wii Fit Trainer, allowing it to be hit at a lower trajectory than usual. This is especially useful for getting a low angle Header without having to delay the move's startup whatsoever. This tech also has a few Header cancel uses, as the altered ball spawn location streamlines certain Header cancel followups. The tech is called teeter Header due to it being performed right on the edge of the stage, where characters usually teeter.

If the player uses Header directly under the lip of a stage, the ball will warp up through the stage and land on the ground harmlessly, hence the name. This essentially serves as yet another form of Header canceling, as it sets up the ball to be hit by the player once they get back onstage. After ball warping, an edge attack is the primary followup, sending the ball at a quick diagonal trajectory. This tech will only work on stages with slanted undersides, such as Battlefield. Ball warping was patched out of Ultimate in update 3.0.0.

A more drastic form of ball warping is a tech known as ball passing, so named because the player passes the ball directly through the stage.[1] To perform the tech, the player must use Header while Wii Fit Trainer is pressed against the underside of a slanted stage, too low down for ball warping to occur. This will clip the ball inside the stage and keep it there. With this accomplished, the player must then use Super Hoop to hit the ball while it is still inside the stage's collision, consequently sending it up through the stage with an active hitbox. The ball can be hit in either direction depending on which way the player is moving with Super Hoop. When the ball is clipped inside the stage, Super Hoop is the only move that can be used to hit it, since getting into position for the tech requires the use of a double jump and Wii Fit Trainer falls too quickly to hit the ball with an aerial while it's still inside the stage. Ball passing was patched out of Ultimate in update 3.0.0 alongside ball warping. Ball passing is technically possible to perform in Smash 4, but the trajectory at which Super Hoop sends the ball is completely useless. 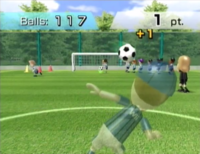 The soccer ball as it appears in Wii Fit's minigame, Soccer Heading.

The soccer balls originate from Soccer Heading, a Balance Game in Wii Fit that requires the player to lean left or right on the Wii Balance Board to control their Mii in order to headbutt incoming soccer balls. The game is won by successfully heading as many soccer balls as possible while avoiding other objects.

The header is a real technique in soccer where the head is used to control the ball. The technique has its origins through a loophole in the Laws of the Game, which states that no players but the goalkeeper are allowed to handle the ball with their hands and arms except when putting an out of bounds ball back into play. Since there is no law stating any other part of the body is forbidden, including the head, techniques and strategies were formed around this technicality to form the game as it is today.