The attack consists of Byleth pulling out the bow and charges up an arrow to fire. Once released, the arrow will fire in a straight line, unaffected by gravity. The arrow will disappear after traveling a certain distance if it does not hit an opponent. Unlike Link's bow, once the move is inputted, Byleth will go through with the attack rather than prematurely release the arrow. If the button is held, the arrow becomes more powerful, but the attack can no longer be reversed or shield-canceled, locking Byleth's movement until they fire the arrow. A fully charged arrow seems to gain properties of an energy projectile, as it can be absorbed. Also, while it can be reflected, the fully charged arrow cannot be inhaled, or pocketed.

The fully charged arrow, while being hampered with one of the slowest startups in the game, is also one of the strongest projectiles in the game, able to KO middleweights around 50% at the ledge. Additionally, both the charged and uncharged versions of the arrow deal unusually hefty shield damage, with the charged version nearly being able to break a full-sized shield all by itself. However, if a fully-charged Failnaught shot is reflected back at Byleth, it has the potential to KO them even at 0%.

Byleth may occasionally say "Failnaught!" while using this move.

When cancelling Failnaught with a shield, double jump, or airdodge, there is a 4-frame transition between cancelling the attack and the action being performed. Interrupting this transition by releasing the shield button or landing before these 4 frames are up causes Byleth to go into the standing state instead, allowing them to immediately act. This can be used as a conditioning tool, or as a way to bait and punish approaches.

Failnaught is one of Byleth's four weapons utilized throughout his moveset, with only neutral aerial and neutral special causing Byleth to wield it. Unlike the prior weapons, Failnaught does not feature any particular traits.

Byleth utilizes Failnaught in his neutral aerial, where he spins Failnaught around himself, hitting multiple times. It's his fastest aerial attack at frame 6. It is useful for edgeguarding and approaching, has some combo potential, and it also possesses a landing hitbox, making it a useful multi-purpose aerial attack. 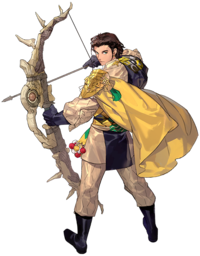 Failnaught is one of the 14 Heroes' Relics in Three Houses, regalia weapons forged from the bones and hearts of the Nabateans by "those who slither in the dark", and the personal weapon of Claude von Riegan. While it is in his possession, it grants him the Fallen Star combat art, which is effective against dragon enemies and lets the user avoid all other attacks during the enemy's next round of combat. Failnaught can be wielded by other characters, but it will not grant Fallen Star to those without the Crest of Riegan and those without a Crest will take damage after attacking with it.

Though the act of charging the bow to fire a beam of light is largely unique to the Super Smash Bros. series, Claude is shown to be able to charge an arrow with Failnaught in the animated cutscene "A New Dawn", where he charges an arrow and fires it upward as he and Byleth are fighting Nemesis. As Byleth distracts Nemesis, the charged arrow falls and pierces Nemesis' arm, allowing Byleth to land the final blow. Unlike in the Super Smash Bros. series, the arrow had a jagged pinkish-red glow more akin to Areadbhar's effects, instead of producing a golden beam.