When the move is used, Byleth pulls out the lance and slashes upward, carving a large area in front of him. If the move is inputted like a smash attack, he will dash forward during the swing, significantly increasing its horizontal range. In the air, Byleth moves a shorter distance forward regardless if smash-inputted or not, and it covers a larger area than his aerials. He can grab ledges during the move, and due to its large hitbox, can potentially shutdown ledgetrap attempts. Like the rest of Byleth's moves that utilize Areadbhar, this move is stronger at the tip of the lance; the hilt of the lance deals 11.5% while the tip deals 17.25%, with stronger knockback and hitstun, being able to KO around 120%.

Areadbhar is active for 65 total frames and comes out on frame 20 (frame 21 in the air). Interestingly, the sourspot hitbox comes out one frame before the sweetspot, and gains priority for that frame. In the air, the total amount of remaining frames determines how much landing lag Byleth has.

Byleth may occasionally say "Areadbhar!" while using this move.

Areadbhar is one of Byleth's four weapons utilized throughout his moveset, specifically bound to forward and back moves. These moves generally have impressive range in exchange for more narrow hitboxes. It features a tipper mechanic similar to Marth's, with the hilt dealing comparatively low knockback and damage and the tip dealing 1.5x the damage of a hilt hit.

For his forward smash, Byleth thrusts Areadbhar forward, similar to Corrin's forward smash. It is fairly slow for a forward smash, however, and has a fairly weak sourspot covering the shaft of the lance. It can be angled, with the upward-angled variant being stronger, and the downward-angled variant being weaker in exchange for being able to more reliably hit shorter, crouching, prone or ledge-hanging opponents. It is one of the longest ranged non-projectile forward smashes in the game, though this is also due to the fact that Byleth's hurtbox gets shifted forward, which can potentially be punished by moves with longer range.

For his forward aerial, Byleth swings Areadbhar horizontally forward. A decent spacing tool that is fairly safe if spaced at the tip and fast-fallen. The tip has decent horizontal knockback, whereas the shaft is overall weak in comparison. Has the lowest ending lag and landing lag of Byleth's aerial attacks, and is the only one that can autocancel in a short hop. Interestingly, this move's sweetspot does not utilize a slash sound effect, rather a punch sound effect.

For his back aerial, Byleth thrusts Areadbhar backward. Similar to forward aerial in terms of utility, but it exchanges speed for additional power and slightly longer-active hitboxes. 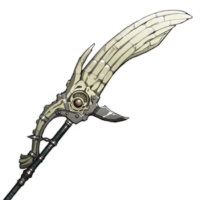 This lance is one of the 14 Heroes' Relics in Three Houses, regalia weapons forged from the bones and hearts of the Nabateans by "those who slither in the dark", and the personal weapon of Dimitri Alexandre Blaiddyd. While it is in his possession, it grants him the Atrocity combat art, which is effective against all other enemies. Areadbhar can be wielded by other characters, but it will not grant Atrocity to those without the Crest of Blaiddyd and those without a Crest will take damage after attacking with it. The attack itself is based on the critical hit animation for Areadbhar in Three Houses.