Robin casts two gusts of Wind magic in the form of green-wind cutting waves to attack any opponents below them while propelling themself upward, serving as a recovery move. Each gust of wind inflicts 5% damage; the first shot gives a small vertical boost and is capable of meteor smashing in the air at point blank range, while the second shot sends Robin rocketing up with great vertical distance. The wind blades can be reflected, which can cause Robin to meteor smash himself if the first hit is reflected at point blank (even though the wind will travel upwards). It also changes Robin's active Tome to Elwind if not already in use.

As a recovery, Elwind gives Robin a massive amount of height and grants them great control of their movement at the end of the move as well, making it a surprisingly reliable recovery move. However, it leaves Robin vulnerable to attack from above, and like Robin’s other tomes, Elwind has limited durability. In Smash 4, a fresh Elwind tome has 18 durability points, and each wind blade uses one point, giving the move a maximum of 9 uses. In Ultimate, a fresh Elwind tome has 20 durability points, and each wind blade uses two points, giving the move a maximum of 5 uses. If the wind tome's durability is used up, Robin will toss the tome away, unable to use the move for anything but a failed casting animation. This disables Robin's only recovery move until the tome is replaced. Because of this, the player has to keep track of the amount of times they have cast Elwind, for Robin risks exhausting it if he gets sent off the stage too frequently. After a cooldown period of 6 seconds (the same cooldown as that of the Levin Sword), Robin will replace the tome and be able to cast Elwind again. If Robin uses Elwind with only one durability point left, they will produce the first wind blade but not the second, and will gain almost no height. As of Ultimate, using Elwind with the tome depleted will cause them to gain a short vertical boost. What's more is that this boost will not render him helpless, which will allow them to follow up with a midair jump or directional air dodge. 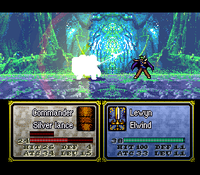 Elwind was introduced in Fire Emblem: Genealogy of the Holy War, the fourth game in the Fire Emblem series. It is one of the four "El-" tomes which constitute the second stage of anima magic, along with Elthunder, Elfire (which existed by itself in games before Genealogy), and the light spell Ellight. As its name suggests, Elwind is the wind variant and is superior to the basic Wind tome.

Like most wind spells, Elwind has always been depicted as a blade of wind which blasts the enemy. In all games since Fire Emblem: Path of Radiance, Elwind does in fact summon two or more blades of wind, although they are always shot around the same time, rather than one after the other like in Smash.