Din's Fire (ディンの炎, Din's Flame) is Zelda's side special move in each game she has been playable in.

The attack involves Zelda projecting a fireball across the stage, with her controlling the direction it moves until she releases it or it reaches its maximum distance, where it then creates a damaging explosion. It can be directed with the control stick or D-pad (while holding the special button) and can be released by letting go of the special button. The farther the fireball travels (and thus the longer the move is held), the stronger the explosion.

The explosion can be countered or absorbed, and it can also be reflected, but this only changes the owner of the attack and does not send it back towards Zelda.

If Zelda is interrupted before she releases the move, the fireball will continue travelling and explode at its maximum distance as if the move were still being charged, but without Zelda's control. 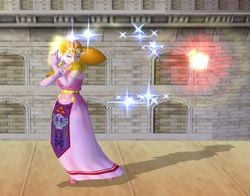 Din's Fire in Melee is a projectile that can cover extremely far range horizontally, allowing Zelda to hit an opponent virtually anywhere on moderately sized stages, while dealing a decent amount of damage. Despite the incredible range the move gives Zelda, it is a virtually useless projectile of no practical use. While the projectile has incredible potential range, actually hitting with it is extremely difficult against even an inexperienced player; the fireball is completely visible as it travels, leaving it easily telegraphed to where it's going, and as Zelda releases the move, there is considerable delay before the explosion comes out. The explosion is also very small, necessitating precision to land the projectile. With the telegraphing, delay, and small hitbox size issues, opponents can evade it by just simply moving away or just shielding as the fireball is on top of them, and with the move's high ending lag, Zelda is completely unable to capitalise on the opponent's forced maneuvering/shielding. Another major issue with the move is that Zelda is completely defenseless while using it, and since the fireball poses no immediate threat with the aforementioned delay issues, opponents can easily run through and attack Zelda, meaning the move will give opponents a free punish if they are alert and not too far away. The projectile additionally doesn't have much consequence on the opponent when it is landed, dealing only average damage, and very minor vertical knockback that will never KO at realistic damages nor be helpful for edge-guarding.

As such, with the projectile's inability to force approaches (as it is incapable of pressuring and an alert player will always be able to easily dodge it), losing to every other projectile in a projectile war, the extreme unsafeness of the move, and the fact it doesn't accomplish anything but some minor additional damage when landed, it is tied with Bowser's Fire Breath for the worst projectile in Melee and is considered one of the worst moves altogether in Melee. 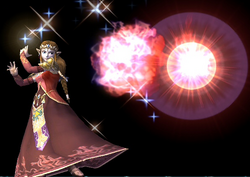 Zelda retains Din's Fire as her side special move in Brawl, where it operates and functions the same as it did in Melee. However, it has received some significant buffs; the explosion when the move is released is significantly larger (now being about the size of a large character), the explosion deals increased damage and significantly more knockback (with it now being capable of KOing in the 150-200% range depending on how much it's charged), and there's much less delay with the explosion coming out upon release and slightly less ending lag. However, despite these significant buffs, Din's Fire is still considered a very poor projectile; alert opponents can still easily dodge and shield it while Zelda can do nothing about it (making it still difficult for it to force approaches), Zelda is still extremely vulnerable while using the move, Zelda will still not win any projectile wars with it, and the power buffs were not enough to justify it being such an unsafe and difficult to land projectile, while it is still not powerful enough to be able to reliably KO under 150% in most circumstances.

Din's Fire mainly sees use as a damage-racking move when an opponent is too far away from Zelda, even though it's not very effective at it. It also sees some use as an edgeguarding move, where the move can allow Zelda to assault recovering characters almost regardless of their position, while Zelda remains completely safe. While this can be very effective against CPUs and inexperienced players, where Din's Fire can be landed on them over and over, it doesn't have much use against competent players, who can still easily air dodge it even offstage, and can even use getting hit by Din's Fire to aid recovery if their damage isn't high enough to get outright KO'd by it (as it hits diagonally).

Zelda retains Din's Fire in Smash 4, in which it is drastically nerfed. It has less range, less speed, less angling maneuverability, a smaller hitbox, and deals less damage overall. The move gains a sweetspot with strong knockback at the center of the explosion, but the sourspot deals half the damage of the sweetspot and much less knockback. Unlike most projectiles, this move is immune to Gravitational Pull.

Din's Fire no longer leaves Zelda helpless when used in midair, which allows her to use the move to cover her recovery after being launched off-stage.

The move is based on the Din's Fire spell Link uses in The Legend of Zelda: Ocarina of Time, although the two have different effects. In Ocarina of Time, rather than being a small sphere sent over distance, it is a large explosion of fire radiating outwards from Link, used primarily as an offensive spell, but also used to solve puzzles. It is the spell which is representative of Din, the Goddess of Power.

Link does not have this move in any Super Smash Bros. games, despite him being the one to use it in Ocarina of Time. Years later, Zelda herself would be able to use the move in the spinoff Zelda games Hyrule Warriors and Cadence of Hyrule.