A large blue crystal forms itself around Zelda, which then splits into tiny blue crystals that spin around her. It can do several hits of damage and also reflect projectiles. Using it in mid-air slows Zelda's descent, though very slightly. 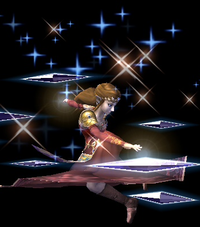 This attack will reflect any projectiles, similar to Fox's Reflector. However, unlike most other reflectors, there is a moderate amount of downtime after the move is used during which it will not reflect projectiles. This makes timing Nayru's Love important and Zelda may be hit by projectiles if she uses it too early. Zelda is also briefly intangible while using Nayru's Love, so it can be used as a defensive option, but since it has noticeable ending lag, it must not be overused.

The hitboxes from the shards tend to draw characters towards Zelda (with the exception of the outermost shards). This means that as long as the centre of the opponent is between Zelda and the outermost shards, this attack will rack up 13% damage, making it one of the most damaging reflectors when used as a direct attack. If the player hits the opponent with the move, it will also push them in the direction that the player is facing. This may be important to know because this way it's possible to push them in certain bad positions like off the edge or below the stage. However, as of SSB4, this function is no longer present, as opponents are now knocked back depending on which side Nayru's Love connects. The attack can also deal up to 15% damage if the player hits an opponent at Zelda´s back, pushing the opponent towards Zelda and dealing maximum damage.

In Brawl, if Zelda is in the momentum from being hit, buffers her mid air jump (upwards or a diagonal mid air jump) and uses Nayru's Love, she will gain a large boost upwards or diagonally. This is useful for Zelda's recovery while reflecting projectiles. It is known as Nayru's Love Jump.

The attack is based on the Nayru's Love spell in The Legend of Zelda: Ocarina of Time. The spell is obtained from a Great Fairy in Gerudo Desert, making it one of the later skills Link can earn. The spell involves Link casting a large blue crystal around himself, which drains a quarter of his magic meter (or an eighth, if upgraded) and lasts for one minute. While the crystal is active, Link is immune to all damage, but he can still flinch or be knocked down, and he cannot use magic to do anything else.

Nayru's Love is the spell which is representative of Nayru, the Goddess of Wisdom. Unlike Zelda's version, it could not be used offensively. Link does not have this move in any Super Smash Bros. games, despite him being the one to use it in Ocarina of Time. Years later, Zelda herself would be able to use the move in the spinoff Zelda games Hyrule Warriors and Cadence of Hyrule.