From SmashWiki, the Super Smash Bros. wiki
(Redirected from Final Smashes)
Jump to navigationJump to search 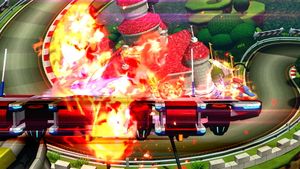 A Final Smash (最後の切りふだ, Last Trump Card) is a type of last resort attack introduced in Super Smash Bros. Brawl, and a fighter's equivalent to a super move in other fighting games.

Final Smashes tend to be incredibly powerful attacks, often leaving the user invincible for the move's duration (the periods vary from character to character, but always apply upon startup/execution), and are generally unblockable. If properly executed, they usually have the capacity to KO at least one opponent. Final Smashes performed correctly will give the player a great advantage, and may help to catch up to others or cement a commanding lead. Many Final Smashes also temporarily slow down stage elements, such as platform movements and motions in the background. However, in many cases, stage hazards' hitboxes remain active while a non-cutscene Final Smash is in effect, making them exploitable for gaining additional damage.[1]

To perform a Final Smash, a player must first either destroy a Smash Ball, fill the Final Smash Meter in Super Smash Bros. Ultimate (although then the Final Smash will be weaker), be given the ability by Victini or fall sufficiently far behind in a match that they are given a "Pity Final Smash" upon respawning. Once any of these happen, the screen will darken, the player's character will be engulfed in a multi-colored aura and their eyes will glow a bright yellow; officially refered to as Standby Mode, the character's neutral special move is effectively replaced with a single use of their Final Smash.

In Brawl, the majority of Final Smashes are powerful enough that they have the potential to KO incredibly early or even one-hit KO if used properly. In SSB4, Final Smashes were universally made much weaker, many of them no longer being able to KO opponents at low percentages. In Ultimate, they have been slightly nerfed overall once again. If a player doesn't use their Final Smash in about 20 seconds, the effect will expire. Final Smashes have also been tweaked to be less disruptive to the gameplay.

Bayonetta's Infernal Climax in SSB4 became the first Final Smash with the potential to instantly KO trapped opponents. In Ultimate, several Final Smashes have this property.

Gigaslash is an example of a cutscene Final Smash.

Most Final Smashes cause the camera to temporarily zoom in on the user when activated, though there are some situations where this does not occur, such as with Pac-Man's Final Smash, Super Pac-Man. In Super Smash Bros. for Wii U, through a currently unconfirmed nature, there are some cases where Final Smashes that normally zoom in don't zoom in at all. In Ultimate, there are two types of zooms: activating after breaking the Smash Ball will have a closeup on the user from a different angle, and activating from a Final Smash Meter will have a standard zoom similar to Brawl and SSB4.

While every player can be in standby mode simultaneously, only one Smash Ball or Final Smash can be present onscreen at any given time. When a Final Smash is active, all other players temporarily exit standby mode and regain it upon conclusion. When most Final Smashes are performed in the air, upon ending the move, the character gains a slight boost in height and regains their spent midair jumps, usually preventing a self-destruct.

Final Smashes are affected by Rage and Stale-Move Negation (and therefore will usually gain a freshness bonus), but are not affected by stat changes from equipment or Mii Fighter sizes.

Masahiro Sakurai revealed in an interview with former Nintendo president Satoru Iwata that he intended to include Final Smashes in the original Super Smash Bros., even going as far as to record voice clips for each of them.[2] However, the Nintendo 64’s console limitations could’ve been the reason why they were scrapped and the idea wouldn’t be implemented until Brawl. Some of these voice clips, which were contained in the Super Smash Bros. debug menu, were eventually and correspondingly used in Brawl. 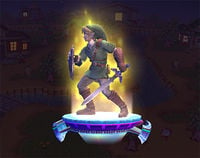 Link with a Pity Final Smash.

A Pity Final Smash (Easy Final Smash in SSB4 and Ultimate) randomly occurs when any player is KO'd and is 5 points behind the current leader. Also, in SSB4, at least 6 KOs between all players must be landed for any player to acquire one. This player respawns with the ability to perform a Final Smash. This Final Smash cannot be dropped by the player.

In a 2-player timed match in Brawl, since the points differ by two for each kill, it is possible to go from a lead of 4 points to 6 without triggering the Pity Final Smash condition (which is to be exactly 5 points behind). If a player SD's, and consequently loses only one point, then a Pity Final Smash is possible.

Mario's FS Meter, which is currently at the max gauge.

Sakurai stated in a Nintendo Direct that every Final Smash would be standardized to be simple and straight to the point. As a result, Final Smashes were made universally faster in Super Smash Bros. Ultimate, removing most player-controlled ones; the KO potential of Final Smashes has also been reduced. Because of the universal speed increase and control removal applied to Final Smashes, many Final Smashes such as Bowser's Giga Bowser, Wario's Wario-Man, and Little Mac's Giga Mac had their functionality changed significantly (they no longer use their full moveset transformation Final Smash; it is instead a single hit that quickly returns to regular gameplay). Others such as Fox and Falco's Landmaster and Donkey Kong's Konga Beat, have been completely replaced. The Final Smash Meter (FS Meter) is also introduced, which is a toggle feature in the rules that allows players to gain a weaker form of their Final Smash by filling up their gauge during battle. However, while multiple meters can be full at once, only one Final Smash can be performed at a time. All other FS Meters are disabled while a Final Smash is active, then re-enabled once it concludes. As of update version 4.0.0, players can hold onto a full FS Meter for up to 20 seconds before losing it and starting over. In addition, when Victini appears, it will give the fighter who summoned it access to their Final Smash without filling up their meter.

During a Final Smash, the camera controls are disabled. Additionally, a close-up of the fighter's eyes will briefly appear upon activating the Final Smash (except for Mii Fighters), and the stage background will change to a solid-colored pattern while the Final Smash is in effect.

In tournaments, all items, including Smash Balls, are turned to "none" and "off," respectively, meaning that Final Smashes do not appear in tournaments. While there has been some dispute in the past whether Smash Balls solely of all items should be allowed, due to Final Smashes resembling the "super move" concept of more traditional fighting games, the general consensus is that they are detrimental to competitive play for several reasons:

Because items are turned to off and none and tournament rules generally specify lower stock than what is required to trigger them, Pity Final Smashes also do not appear in tournaments. The common argument for including them is that, as Pity Final Smashes do not appear at random, one can reap the benefits of a Final Smash without relying on luck, allowing players in a heavy losing position to stage an easy yet effective comeback. However, this can only happen in a match of at least 6 stocks, which is considered to be far too high for tournaments as it drastically increases playtime, and competitive players generally consider an element designed solely to aid a worse-performing player to be anti-competitive. In SSB4, as they cannot occur in a 1v1 setting, in which most competitive matches take place, it can be said that Smash Balls must be disabled solely due to Easy Smashes having the capacity to occur in a doubles match but not a singles match.

Super Smash Bros. Ultimate seems to address a number of these issues:

Despite all the aforementioned restrictions set within Ultimate's configurations, Final Smashes continue to be plagued by many of the same complications that were of concern in the past:

As such, Final Smashes of any form remain universally banned in competitive play.

The eyeball glitch in a match and in a victory animation.

In SSB4, a glitch can occur affecting the eyeballs of multiple characters, most notably Jigglypuff, as a result of an oversight in the coding of the graphical effects of characters eyeballs during Final Smashes. When breaking the Smash Ball with a move that causes a character's eyeballs to point in a certain direction, upon finishing their Final Smash, said fighter's eyeballs will be locked in this same position until a move or action is performed that also causes the fighter to look in a direction. This occurs because a fighter's eyeballs are temporarily replaced with yellow eyeballs when they break a Smash Ball, at which point their regular eyeballs are stored exactly as they were just before their eyeball model was replaced. In some extreme cases, this glitch can even be carried over into victory animations, such as one of Jigglypuff's victory animations.

There was a glitch that existed in Brawl and SSB4 that allowed Giga Bowser, Wario-Man, Giga Mac, Mega Charizard X, or Mega Lucario to survive after being defeated in Stamina Mode. When this occurs, if the transformed character's HP is depleted, their stamina gets reduced to 0 HP (zero hit points) and their transformations are undone. Then they are able to continue to fight; despite having "0 HP" displayed.

"Break a Smash Ball and then press