List of Super Smash Bros. references in other franchises 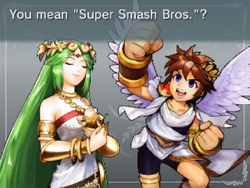 These are references from franchises directly represented in Smash.

The message from Rodin. 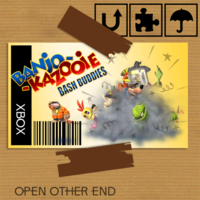 Master Hand and Crazy Hand in Kirby & The Amazing Mirror.

The Smash Bros. ability in Kirby: Planet
Robobot and its description.

The SSB4 base roster, plus Mewtwo and Lucas, in Super Mario Maker. 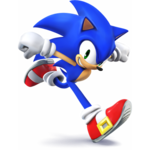 Left: Sonic's pose in one of the movie's posters.
Right: Sonic's main character artwork from Smash 4.

The entire starting roster from the Puzzle Swap panel

Ganondorf's silhouette with his SpaceWorld 2000 / Melee sword in Hyrule Warriors. 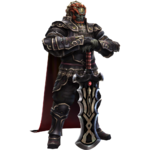 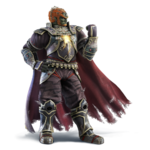 (left) Ganondorf's design as seen in Brawl, modified from its original variant.
(center) The costume from Hyrule Warriors.
(right) The SSB4 variant that is 100% faithful to its original appearance in Twilight Princess.

Wonder-Dancer's profile in The Wonderful 101. 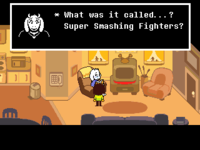 Toriel stating the parody title "Super Smashing Fighters" in a conversation with Kris in Deltarune.

Many of the character-based skins for Yoshi in Yoshi's Woolly World are inspired by characters in SSB4.

Platform fighters are a subgenre of fighting games where characters have free movement around a multi-level stage, often (but not always) with the victory condition being to knock opponents off the stage. While Super Smash Bros. is not strictly the first such game, it is the one that codified the subgenre and set the standard for future such games, which for a time were only known as "Smash-style fighters" or similar before the term "platform fighter" stabilized.

TF2's version of the damage meter, seen on the left

The quote from Not a Hero.

Other songs feature minor references to the series:

King K. Rool in Inside Job.