The Wombo Combo refers to both a video in the competitive Smash community and the finishing combo featured in this video. Stemming from a doubles match in Super Smash Bros. Melee featuring commentary by HomeMadeWaffles, Phil, and Mango in response to a combo started by SilentSpectre and Tang against Zhu, the video later became an internet phenomenon, and one of the most famous videos in Smash history.

The Wombo Combo was performed during losers' semifinals at the regional tournament SCSA West Coast Circuit on December 6th, 2008. The deciding game of the set took place on Battlefield, with SilentSpectre (as Captain Falcon) and Tang (as Fox) fighting against Lucky and Zhu (both as Fox) in doubles. Near the end of the match, Lucky was KOed by SilentSpectre's up smash, giving the latter and Tang a significant stock advantage; they both had two stocks apiece, while Zhu had only one left.

The combo itself began after Zhu poorly spaced two back aerials; the first one hit SilentSpectre for negligible damage, while the second one missed completely. Capitalizing on the mistake, Tang performed a grab release, opening up a massive combo consisting of multiple grabs and throws by SilentSpectre and up smashes from Tang, ultimately culminating in Tang's Shine to up smash into SilentSpectre's Knee Smash to KO Zhu. Within the span of only seven seconds, Zhu's damage had gone from 0% to 77%, and he and Lucky were knocked out of the tournament.

Shortly before the combo, the commentating team of HomeMadeWaffles, Phil, and Mango made snide remarks about Zhu's predicament, such as "poor Zhu", "Happy Feet?", and "that ain't Falco!", ironically referencing Zhu's series of Falco-themed combo videos entitled "Happy Feet". As the combo began, however, all three degenerated into constant yelling, with HomeMadeWaffles screaming the now-infamous phrase "Where you at?!" into the microphone several times as the match ended. After the end of the match, the stunned response of the smashers taking part in the match, as well as the observers, can be heard in the background.

SilentSpectre and Tang went on to top the losers' bracket and made it to the grand finals against Mango and PsychoMidget; however, they ultimately lost and finished second place in the tournament. 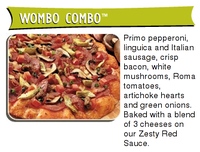 Contrary to what the video's commentary might imply, and based on the commentary of the previous match of the set, the term "Wombo Combo" was initially a generic term used to refer to either a combo of Fox's Shine to an immediate up smash (which by itself is technically demanding and reasonably impressive) or any particularly impressive team combo. However, once the combo occurred and was seen to contain both these elements, all previous connotations of the term became antiquated.

The term "Wombo Combo" itself reportedly originates from a pizza offered by the chain "Round Table Pizza". In fittingly grandiose style the pizza features various uncommon toppings, including artichoke hearts and green onions.

The profanely-worded combo video quickly became popular in the Smash community due to both the absurdity of the commentary and the combo itself. However, the video would later go on to become popular in other communities on the Internet, causing it to become an internet meme. This occurred because of the video's humorous reactions that can be partially applied to a wide variety of other games, coining such phrases as "Where you at?!", "Happy feet!", "That ain't Falco", and "Get yo' ass whooped!". The commentary has since been applied to other videos to make them more humorous, such as scenes from the Pokémon anime and multiple videos related to baseball. In addition, several multiplayer online battle arena games, including League of Legends and Dota 2, have incorporated the term "wombo combo" to refer to several teammates using extremely powerful attacks to damage an opponent with no chance of escape. It is widely considered as an MLG-type meme on the internet.

The original Wombo Combo video, uploaded by Lumpycpu on December 8th, 2008, has attained over 18 million views on YouTube, a testament to the enduring popularity of the video.

As a further reference to the original video, Zhu's current YouTube channel is named "Poor Zhu".

"Sequels" to the Wombo Combo[edit]

A later reenactment of the Wombo Combo occurred during the second grand finals game between SilentSpectre and Tang against Phil and Falcomist on Corneria, at CGC @ SFSU IX(9) (Bi-Weeklies). It is the only Wombo Combo video that didn't take place on Battlefield, and features Replicate as a commentator instead of Phil and Mango.

The lunch money combo was performed in the third game of winner's finals between SilentSpectre and Tang against Shroomed and DP on Battlefield, at CGC @ SFSU XIII(13). Like the previous two videos, HomeMadeWaffles provided the majority of the commentary, though this time, he was assisted by Darrell.

Commonly considered the European version of the Wombo Combo, the UGS combo was done by Armada (Peach) and Aniolas (Sheik) on a Falco on Battlefield. A remixed video was later made, featuring audio from the original Wombo Combo video.

An appearance in another game[edit]

In Completing the Mission of The Henry Stickmin Collection, "Wombo Combo" is the final winning option of the route Capital Gains. To add to the reference, Henry's friend Ellie even says "Happy feet!", and Henry creates his own version of the Falcon Punch.