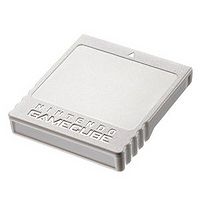 A standard 59 block memory card for the Gamecube.

The GameCube memory card is necessary in order to save data of any sort in Melee, including Records, unlockable characters, and other accomplishments, as well as snapshots taken with the game's Camera mode; as data is frequently saved throughout gameplay, Melee's manual recommends against removing cards or shutting down the console before returning to the title screen. If no memory card is present, the game will warn the player of the fact when the game is booted, though the player can still play the game; inserting a memory card at any point will let the game begin to save data, though it will overwrite any previous Melee data on the card.

Melee requires 11 blocks for its save data, along with further blocks in order to save snapshots; the latter can require anywhere from 3 to 12 blocks of data depending on the complexity of the image.

By default, Melee reads save data from Slot A only, though Snapshots can be viewed from either Slot A or B.

In an unusual use of the memory card, players are rewarded the Captain Olimar trophy if they have save data from Pikmin on their memory card while loading up Melee. Pikmin's save data needs to be on the same card as the Melee save data. Pikmin itself was released after Melee in PAL regions, which made it impossible to collect all the trophies in the game's first month of release; in Japan and North America, Pikmin was released prior to Melee.

Save data for Pikmin takes up 27 blocks on a memory card.

Metal Gear Solid: The Twin Snakes, an enhanced port of Metal Gear Solid for the GameCube, features further compatibility with Melee's save data. Released three years after Melee, one of the bosses in the game, Psycho Mantis, taunts Solid Snake by claiming to have the ability to read minds; among his ways of proving this is by reading data off the inserted memory card and asking Snake and, by extension, the player, about other save data found on the card. If Melee's save data is detected, Psycho Mantis has unique dialogue specifically referencing Melee.

Individual save files for Metal Gear Solid: The Twin Snakes take up 3 blocks each.

The gameplay mod 20XX Tournament Edition is uniquely run by using hacked save data that exploits how Melee loads code. As such, uploading this data to any memory card will force the GameCube or Wii to load 20XX on top of Melee. As an added feature, this data is read like most other data saved to the memory card, allowing for players to copy the hack from one card to another using the built-in software on either the GameCube or Wii.

20XX's data can either be downloaded to a memory card via homebrew on the Wii or through a unique memory card that already contains the data.

Compatibility issues with the Wii[edit]

The Memory Card 1019 can pose unusual difficulties when used with a Wii in GameCube mode, notably the Wii believing that the card is corrupted when it actually is not. In the specific case of playing Melee on a Wii, the card may read as corrupted upon booting the console, but taking it out and re-inserting it with the "card is corrupted" message displaying can clear the issue. The exact cause of this phenomenon is unknown, but it is assumed that the unique hardware of the Memory Card 1019 prevents the Wii from easily reading the data on it; indeed, the card can have problems with some games when running on the GameCube because of its unique hardware. Neither the Memory Card 59 nor the Memory Card 251 are reported to suffer from this issue. As a result of these issues, most tournament setups for Melee prefer the use of the GameCube over the Wii, as well as the two aforementioned cards over the Memory Card 1019.