From SmashWiki, the Super Smash Bros. wiki
(Redirected from Running)
Jump to navigationJump to search 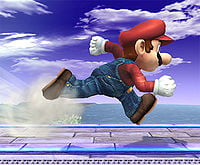 "Run" redirects here. For information on the CPU mode in Brawl, see List of CPU modes.

A dash is a form of ground movement faster than walking. It is performed by tapping sideways on the control stick. The player's character enters their initial dash animation, in which they change directions with very little lag, and then proceeds to their running animation. In Super Smash Bros. Brawl, a character attempting to dash can trip instead. In Super Smash Bros. 4 and Super Smash Bros. Ultimate, dashing off a platform will cause the character to perform a short flipping animation, and landing on another platform while continuing to hold the control stick in that direction will allow them to continue dashing. While dashing, characters can also perform their dash attack, shield, or jump. The Bunny Hood and Super Mushroom items increases a character's running speed.

The initial dash is the first part of a character's dash, during which a character gains a quick burst of speed before transitioning into their run. During a character's initial dash, they accelerate significantly more quickly than they do while in their run animation, and this applies to the dash turnaround animation as well, allowing a fighter to turn around relatively quickly. In addition, during an initial dash, certain options that are normally available to the player cannot be performed, such as shielding, and in Ultimate, canceling into a tilt. Initial dashes have their own speed limits independent from a character's regular running speed, and these speeds are rarely the same as a character's running speed.

The concept of the initial dash is vital to many forms of ground movement, especially in Super Smash Bros. Melee, such as dash-dancing, fox-trotting, and pivoting. However, from Brawl onwards, the window for turning around during an initial dash does not last for the entire dash, instead only lasting for the first 6 frames, making dash-dancing much harder, and fox-trotting is also not entirely dependent on the length of the initial dash. An example of this is Sheik and Roy in Smash 4, who have nearly identical fox-trots despite Roy's initial dash being over twice as long as Sheik's (17 frames to her 8 frames). In Ultimate, a pivot dash can be performed at the end of a character's initial dash, similarly to dash dancing, but with much more restrictive timing, and with the additional 2 frames of startup that pivot dashes have in Ultimate.

The turn-around animation plays when the character attempts to change directions after their initial dash. Unlike in an initial dash, attempting to turn around during a run can take as long as 51 frames (Marth in Melee), and before Smash 4, it can only be canceled with a jump (and therefore up smash and up special) or reversed side special. However, from Brawl onwards, canceling the jump with an up smash or up special also reverses its direction, and in Smash 4, the turn-around animation can be canceled with a reversed forward tilt or forward smash. In Ultimate it can be canceled with all ground moves, doing which will make characters keep some momentum from the animation. Coupled with the universal speed buffs, this allows characters like Chrom and Sheik with high ground speed but laggy dash attacks to use running forward tilt as an approach option. Any shield input is also ignored during this animation, and due to the way the Ultimate input system works, pressing the grab button will produce a 1 frame attack input, allowing for uncharged smash attacks.

A stutter step is the term for when a character begins to dash but stops almost immediately, often used for positioning and mind games. Along with merely stopping, characters can also dash cancel via a variety of other methods.

The skidding animation plays when the character stops running after their initial dash and attempts to stop their momentum. The length of this animation varies between characters, but it can also vary depending on the speed the character is running at relative to their maximum running speed. Shorter skidding animations are preferred, particularly in Smash games where dash canceling is impossible. For example, in Smash 4, Bowser, Charizard, Ganondorf, and Lucario have extremely short skidding animations even after stopping at maximum speed, which effectively allows them to do any attack out of their runs with little lag in between, or even seamlessly begin another dash in the opposite direction. This animation can only be canceled with a jump, or with an item pick up if one is nearby. Its first few frames can also be canceled into any special move.

Because the initial dash animation translates into the running animation much later than in Brawl, it is a vital tool for movement in general and dash-dancing in particular. During the initial dash, the following actions can be used:

During the run—the later part of the dash—different options are available:

Note that several slow runners can use their dash attack to travel a far distance quicker, and some characters have a DACUS to increase mobility. The most notable case of this is Snake, whose DACUS gives him much more stage control and ability to evade opponents.

In Ultimate, run speeds have been buffed across the board by roughly 10%, with the exception of a few characters (for example, Snake's run speed was increased by more than 10%, Ike and Dr. Mario's were increased by less than 10%, and Ryu's wasn't changed at all). Additionally, most initial dashes have seen significant speed increases, which when combined with the altered foxtrot mechanics gives all characters an effective dash-dance. However, turnaround dashes now have 3 frames of delay before fighters begin accelerating, as opposed to the 1 frame delay of a regular dash, making it take slightly longer for fighters to begin retreating by dashing.

left or right to dash. You will continue dashing until you release