From SmashWiki, the Super Smash Bros. wiki
(Redirected from ROB (SSBB))
Jump to navigationJump to search

R.O.B. (ロボット, Robot) is a newcomer in Super Smash Bros. Brawl. His full name is Robotic Operating Buddy and he is based on the R.O.B./Robot NES/Famicom peripheral. He was unveiled in a mass leak prior to the Japanese release of Brawl. R.O.B. was confirmed on the DOJO!! March 6, 2008.

R.O.B. has a set of realistic robot sounds, similar to how Donkey Kong, Diddy Kong, and Bowser use realistic animal sound effects.

R.O.B. ranks 18th on the tier list at the bottom of the high-mid tier. R.O.B. possesses a strong camping game with two very effective projectiles; one is a fast transcendent projectile that can travel across entire stages while going through any hurtbox it connects with, and a powerful item-based projectile that produces a lingering hitbox when it lands, while being able to be picked up and glide tossed with. He also has one of the best recoveries in Brawl, that gains incredible distance while giving R.O.B. nearly free reign to act out of. R.O.B. additionally possesses great tilts and effective aerials, with them having great reach or large hitboxes. However, R.O.B. has significant problems KOing opponents, at least without racking up well in excess of 150+% damage; his finishers aren't powerful (with most having low knockback scaling, making it especially difficult for R.O.B. to KO heavier characters), while having slow start-up, poor hitbox placement, or both, that makes them difficult to land. Additionally, R.O.B. has a large hurtbox, which when combined with his heavy weight and slow aerial mobility, leaves him vulnerable to juggling. R.O.B.'s hurtbox also accentuates his problems dealing with projectile camping from characters like Falco, especially since he lacks a reliable reflector. The hurtbox combines with his below-average mobility to create difficulty in initiating approaches when he lacks a Gyro to glide toss. Another problem R.O.B. has is his poor momentum cancelling options, giving him among the worst endurance for a character of his weight class. Overall, R.O.B. has average matchups, where he holds an advantage over nearly every character below borderline tier, but loses the majority of matchups with several counters against characters above (including a notoriously poor matchup against Meta Knight). R.O.B. has achieved above average tournament results regardless, especially in Meta Knight-banned tournaments.

Complete one of the following:

With the exception of the third method, R.O.B. must then be defeated on Mario Bros. whenever or not that stage has been unlocked beforehand.

R.O.B. plays the role of a long-range attacker very well, with projectiles and means to keep opponents at bay. His base up close is a blind spot, making it important to keep foes away. Many of his attacks balance moderate power and range with short lag-time. His moves with actual KO potential, though, have considerable start up lag or keep him airborne longer than desired. R.O.B. is also prone to Stale move negation on his KO moves (notably his down smash which, due to its low knockback scaling, can have trouble KO'ing heavier characters even at around 200%) rendering him unable to KO at times (however, his up throw can KO reliably at above 160%). He can easily set up an edgeguard using a forward or back throw, but his most powerful aerials are difficult to land. Despite his moves boasting only moderate knockback, R.O.B. can generally keep knocking his opponent away with superior range and combine any of his moves together fairly easily. The resulting damage adds up rather quickly with an experienced player. R.O.B. is decently heavy and floaty (making R.O.B, Samus and Yoshi the only floaty heavyweights), but he is also a large target. He has two projectiles, both with decent knockback and unique properties, which usually mess up the opponent's approach. The major flaw with these projectiles is that they are not spammable (as they must be charged/recharged). His aerial game is also good, with his forward aerial being fast and having moderate knockback, his neutral and back aerial being powerful but difficult to land, and his down air acting as a Meteor Smash (although it has a very slow start-up). His back aerial can also aid his exceptional recovery, both his back and down aerials push R.O.B. up slightly when using Robo Burner. With the addition of Robo Burner, he is quite interesting to experiment with on certain combination of attacks and techniques such as a Wall of Pain. In fact, a technique sometimes called "burner flashing," which is initiated by first using Robo Burner and then repeatedly pressing B, has been proven to be the farthest vertical traveling recovery move in one go. R.O.B.'s recovery does have its problems. He can't air dodge out of Robo Burner, making his recovery predictable for some characters and he can be juggled because he is floaty in both jumping and recovery, notably by Meta Knight and Fox. His slow fast falling also makes his momentum canceling poor, getting KOed vertically at relatively low percentages, especially for his weight class. R.O.B.'s side special reflects projectiles, but characters with more spammable projectiles can easily overwhelm R.O.B. from afar, and it isn't useful as an attack. Overall, with a very flexible ranged game, R.O.B. can be a dangerous foe for many characters in the game.

A cover of the track that would play when starting up Memory mode in Stack-Up, the first game that the R.O.B. accessory was compatible with.

R.O.B. was initially a top tier character, being ranked 6th in the first tier list (September 2008). He was considered a difficult matchup for many players, who weren't experienced enough at the time to get around his weaknesses, and he was very dominant, with his attacks known for being fast and having great hitboxes. However, as time progressed, R.O.B.'s weaknesses became more prominent, with players learning to get around the blind spots of his attacks, as well as the increasing dominance of Meta Knight, the character which countered R.O.B. the most. R.O.B. continued to drop down the tier list, with the biggest drop being him falling five places from the third tier list to the fourth. He currently ranks 18th place in upper-mid tier, in the eighth tier list, as of April 2013.

R.O.B. has a decent matchup spread overall, as he is countered by six characters, soft countered by six, and goes even with eight. On the other hand, he soft counters thirteen characters, counters Captain Falcon, and hard counters Ganondorf. R.O.B. does well against characters who struggle against his zoning game, such as Ike and Captain Falcon. However, other characters can take advantage of his large hurtbox, trouble KOing opponents, and poor approach, such as Meta Knight, Falco, and Olimar. His heavy weight also leaves him susceptible to King Dedede’s chaingrabs. R.O.B. poses a threat to almost every character lower than him, but does not make a significant impact against characters above him. 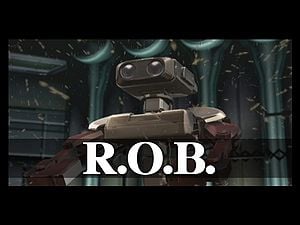 The race of R.O.B.s appear under four roles in Super Smash Bros. Brawl. During the Subspace Emissary, they are a unit of the Subspace Army and are used to activate the Subspace Bombs, as well as guard the Ancient Minister and come in different variations; R.O.B. Sentry, R.O.B. Launcher and the R.O.B. Blaster. The bodyguards for the Ancient Minister are called "The R.O.B. Squad". When a pair of R.O.B.s are used to activate a Subspace Bomb, they are destroyed in the explosions.

A hologram of Ganondorf appears and commands the R.O.B. minions to detonate all the Subspace Bombs in the building, only to have the Ancient Minister tell him off. Ganondorf then orders the R.O.B.s to attack the disobedient Minister. They burn the Minister's robes away to discover that their target is a R.O.B. himself. At that point, R.O.B. decided to stop destroying the world and joined the heroes. After he and his friends defeat a flock of Auroros sent in by Ganondorf, he mourned at the fact that the Subspace Bombs are about to selfdestruct, along with the R.O.B.s that set them off. Realizing that they cannot pull the R.O.B.s away from the bombs, Captain Falcon calls in the Falcon Flyer, DK grabs the melancholic R.O.B. and the Smashers depart, despite Meta Ridley getting in their way.

Captain Falcon drives the Falcon Flyer straight into the Subspace along with everyone else. Unfortunately, Tabuu uses his Off Waves to reduce them all into trophies; R.O.B. among them. King Dedede, Ness, Luigi and Kirby, who were revived by the Dedede Brooch, find them and bring them back to life. With all heroes reunited, they endure the Great Maze and fight Tabuu.

R.O.B. is one of the few characters who has two names displayed throughout the story. The first time is as the Ancient Minister and the second time as R.O.B. Zelda and Samus also have different names displayed, labelled at different times as "Sheik" and "Zero Suit Samus", respectively.

R.O.B appeared several times in the Subspace Emissary as the Ancient Minister until he was finally revealed to be a friendly R.O.B unit. He appeared in Midair Stadium, The Plain, The Battlefield Fortress (where he was seen being attacked by Ike to prevent him from dropping a Subspace Bomb), The Cave, The Wilds (Part II), & finally in The Subspace Bomb Factory (Part I).

R.O.B.'s main and Final Smash trophies can be obtained by clearing Classic Mode and All-Star mode respectively with R.O.B..

R.O.B. sporting his Famicom colors. R.O.B. debuted in Japan as Robot in 1985 as an add-on for the Famicom. He could be combined with a "gyro set," etc. for two types of play. The player controlled Professor Hector, the TV emitted light, and R.O.B. responded to the light by moving. At the time, it was epoch-making game play. Recently, R.O.B. appeared in Mario Kart DS.

R.O.B. sporting his Famicom colors. R.O.B. debuted in Japan as Robot in 1985 as an add-on for the Famicom. He could be combined with a "gyro set", etc. for two types of play. The player controlled Professor Hector, the TV emitted light, and R.O.B. responded to the light by moving. At the time, it was epoch-making game play. Recently, R.O.B. appeared in Mario Kart DS.

R.O.B.'s Final Smash. He emits a beam from his eyes that spreads across the spectrum and undulates in great variety as it travels. What makes this technique different is R.O.B.'s ability to move while using it. This allows him to use it in combination with his other moves to increase his Final Smash's effectiveness.

R.O.B.'s Final Smash. He emits a beam from his eyes that spreads across the spectrum and undulates with great variety as it travels. What makes this technique different is R.O.B.'s ability to move while using it. This allows him to use it in combination with his other moves to increase his Final Smash's effectiveness.