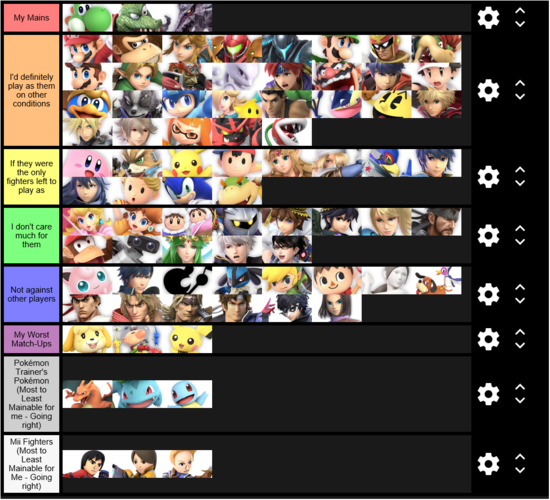 My Mains and Worst Match-Ups; I haven't ranked my honorable or dishonorable mentions though.

This is Smash fan NinTylo (which means my real name is Tyler, and I put part of my name in the very middle of Nintendo). I'm a person for anime and a lot video gaming in general.

Most of my page is gonna be a W.I.P. based on more of Ultimate's DLC having yet to be fully released.

My Opinions on Smash

Whilst there are a couple of issues, their movesets, final smashes, and playability are first rate.

Problems with these fighters are more prominent, but their overall presence is still enjoyable.

This applies to fighters who aren't anything new to the franchise and overall just don't fit in well with even the good ones. On the other hand, specific traits of them are generally fine and serviceable. There can also be fighters with a good moveset of neutral and/or special attacks attached to an otherwise bad final smash or vice versa.

These fighters are affected by sub-par aspects that hurt their enjoyable factor. There is some redeeming value to these fighters, but their cons overshadow their pros at times.

There is little to no redeeming value in these fighters and they may as well have weak movesets with difficult playability.

Nothing about these fighters is redeemable and they go above and beyond in lacking quality that terrible fighters do.

All of them are basically ranked in the order I'd consider them my most mainable.

My adversaries (if Classic Mode was customizable like Stage Builder) consist of my Top Five Mains. The Mii Fighters represent me and my favorite costumes. The penultimate battle is against a giant Yoshi, who's been my main since Melee (much less 64). The boss of my route is Rathalos based on my love of dragons no matter the type (besides wyverns).

Pollyanna (I Believe in You) accompanies the credits if completing my route. 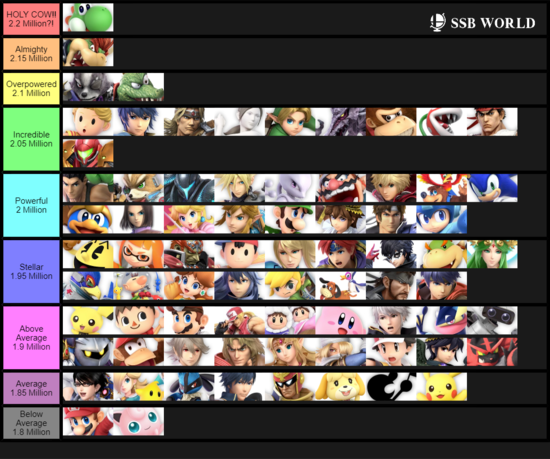 These are my current scores before the month of August 2019. (This tier shall be updated once every month (assuming I get new scores for some - if not ALL of these characters) Bold marks my main, favorite route, and highest score, while Italics mark my Worst Match-Up, despised route, and lowest score.