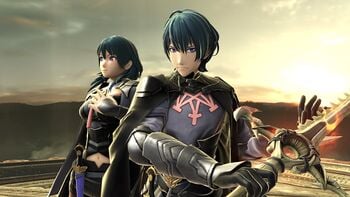 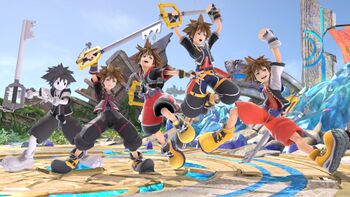 A lineup of Sora's alternate costumes

Each character in Super Smash Bros. Ultimate has a set of alternate costumes that feature different colors or designs. Due to the presence of 8-Player Smash, all characters have eight costumes except for the 3 Mii Fighters, which have a variety of costume options.

Half of Bayonetta's costumes are based on her design from Bayonetta 2, while the other half are based on her design from Bayonetta. For the former half, she wields Love is Blue, which has blue attack trails. For the latter half, she wields Scarborough Fair, which has red attack trails, and speaks English even in the Japanese version. Her Bullet Climax has slightly different sound effects for the two different costume types.[1]

Half of Cloud's costumes are based on his appearance in Final Fantasy VII, while the other half are based on his "Cloudy Wolf" design from Final Fantasy VII: Advent Children.[5] In two of his Advent Childen costumes, his Geostigma-infected arm is covered by a sleeve, while it is exposed in the other two, revealing the red ribbon he wrapped around it in memory of Aerith Gainsborough. His costumes with the exposed arm are based on his appearance in Advent Children after his fight with Bahamut SIN, during which his sleeve is torn off. As of Sephiroth's official release, Advent Children Cloud uses Omnislash Ver. 5 as his Final Smash rather than the standard Omnislash, which is mostly a cosmetic difference; however, the explosion resulting from the move's final hit has slightly different properties regarding the direction in which it launches enemies who were not caught by the rest of the move, thus technically making Cloud the only character in the game with a gameplay difference between his costumes. Cloud's alternate costumes are slightly brighter compared to Smash 4.

Half of Corrin's costumes are male, while the other half are female.

Half of the Hero's alternate costumes represent different protagonists from across the franchise. The other half are recolors of the first four.

The Ice Climbers switch positions and the player controls Nana when using the red, brown, white and orange costumes. The stock icons and character select portraits change to reflect this.

Inkling alternates between the female and male versions from the original Splatoon. Aside from the first, fifth and seventh costumes, the Inkling colors match the respective port color.

Two of Joker's alternate costumes place him in his Shujin Academy uniform from Persona 5. When wearing his school uniform, Joker takes off his glasses when summoning Arsène instead of his mask.

Half of Kazuya's costumes are based on his signature style of a flame embroidered Gi bottom with no top, and the other half are based off his alternate trenchcoat suit outfit from Tekken 7.

Most of Ken's costumes seem to largely derive from his alternate costumes from Super Street Fighter II Turbo. The attributed references below come from that game unless otherwise specified.

Kirby's palette swaps are based on his alternate colors that regularly appear in his own series.

Link's clothing design is based on his Champion's Tunic for half of his costumes, and based on the Hero of the Wild set for the other half. Both are from The Legend of Zelda: Breath of the Wild.

Little Mac is the only character to have their number of costumes decrease from SSB4, going from 16 in SSB4 to 8 in Ultimate.

Lucina's alternate costumes are based on female characters from Fire Emblem Awakening.[13]

The Mii Fighters' various costume options are distinct from how other characters' alternate costumes work. Unlike in SSB4, the colors of Mii Fighters' outfits are now customizable.

Min Min's first four costumes are based upon the color schemes that could be selected by clicking, holding, then tilting the left control stick in ARMS.

Four of Olimar's costumes replace him with Alph, one of the protagonists of Pikmin 3.

Pac-Man's stock icons are the only ones that do not alter its colors directly to represent each palette swap; instead, a colored neon bar (appearing similar to the wall sections from the original Pac-Man) is used under the stock icon. Most of his alternate costumes change his model to give him colored armbands and/or the Wing Shoes power-up from Pac-Land.

For each costume, the container Piranha Plant sits in alternates between a pot and a pipe.

Only the starting Pokémon is shown on the character selection screen; it can be changed by hovering the cursor over it and selecting it. All of Pokémon Trainer's alternate costumes reference a protagonist from each generation of the Pokémon games. The colors below correspond to Squirtle's shell, Ivysaur's bud and Charizard's skin.

Masahiro Sakurai overviewed the palettes for both Pyra and Mythra in the Mr. Sakurai Presents "Pyra/Mythra" video, giving his comments on each.

R.O.B.'s default costume switches between the first and second ones listed depending on the game's language.

Half of Robin's costumes are male, while the other half are female.

With the exception of the purple costume, Rosalina's costumes are complementary to Peach's and transitively may share some sources of inspiration. Additionally, while not traditional alternate costumes, there are six different-colored Lumas outlined here.

Most of Ryu's costumes appear to derive from his alternate colors in Super Street Fighter II Turbo.

With the exception of his first and last alternate costumes, all of Shulk's alternate costumes are based on the color schemes of his party members from Xenoblade Chronicles.[13] His hair now also changes colors to match these characters.

Sora's costumes are based on his outfits from various games in the Kingdom Hearts series. While Sora's physical appearance changes in each game as he grows older, his Smash costumes all use his build from the original game. According to Sakurai, extra effort was put into Sora's alternate costumes due to him being the very last DLC Fighter to be added to Ultimate.

Terry's palettes are based on designs from his own games, and the design on his cap changes for each one.

Villager's appearance varies greatly between costumes, with differing eyes, hair, gender, clothing, and skin color. All of Villager's alternate costumes, with the exception of the yellow costume, are based on how the player may look at the start of a new game depending on how they answer questions asked by Kapp'n or Rover in Animal Crossing: Wild World and Animal Crossing: City Folk, respectively.

Wario alternates between wearing his biker outfit from WarioWare and his overalls from the Mario and Wario Land games.

Wii Fit Trainer alternates between the female trainer and the male trainer. Both of them are characters from the original Wii Fit.