From SmashWiki, the Super Smash Bros. wiki
(Redirected from Movie)
Jump to navigationJump to search 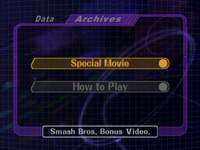 The Archives, found in the Data submenu, allows players to view two videos:

The Archives menu is only available in the NTSC versions of Melee. The PAL versions replace it with a dedicated menu selection for the How to Play video, removing the Special Movie, speculated to be due to the inability to fit all translated languages of the movie onto the disc.

This area, found in the Data submenu as well, allows the player to watch a video from the following options:

Newcomer trailers in Super Smash Bros. for Wii U.

Character endings in Super Smash Bros. for Wii U.

The fourth game features "introduction" clips for various characters. All of them were initially released online by Nintendo, either individually or in a Nintendo Direct. A list of videos that are available in the game follows:

Character trailers for downloadable content fighters are not included in-game.

Additionally, the short fighter-specific videos that are shown after one beats Classic Mode or All-Star Mode in Super Smash Bros. for Wii U can be re-watched after completing the mode with a character.

The Movies menu, with all movies unlocked.

The Vault contains a sub-menu for viewing movies in Ultimate, including the cutscenes seen in Adventure Mode: World of Light. Each cutscene becomes available after first viewing it in Adventure Mode.

Oddly, Ultimate does not continue the tradition of adding trailers and character introductions. This on top of Classic Mode no longer having character endings leaves this sub-menu with significantly fewer entries than Smash 4.