Not to be confused with Bounce, a spell from Hero's Command Selection.

A visual of King K. Rool's down throw, notice the throw point between the hands not reaching the ground.

The Bounce glitch is a glitch involving the buried state, exclusive to King K. Rool and Banjo & Kazooie's down throws in Super Smash Bros. Ultimate. 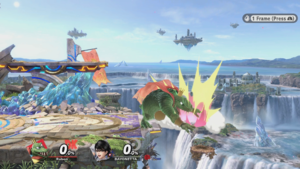 Bayonetta being buried far offstage, resulting in a bounce glitch.

If King K. Rool or Banjo & Kazooie perform a down throw in specific circumstances, instead of being buried, opponents will be buried for a single frame before popping out at unusual heights. These heights are affected by their air speed, with characters such as Falco bouncing notably high. The hit advantage is negligible, though it appears the glitch does not follow traditional bury hitstun rules. This gives the glitch little utility, often acting as more of an inconvenience to players. As such, it is considered to be an inherent weakness to King K. Rool and Banjo & Kazooie's bury throws.

The reason the glitch occurs is because the opponent does not get directly buried into the ground, though reasons as to exactly how or why are unclear and inconsistent. The most commonly accepted hypothesis is that the Environmental Collision Box (ECB) fails to detect the ground upon usage of down throw. The throw point of the move also comes into this, as King K. Rool and Banjo & Kazooie's throws do not directly place opponents on the ground. This is usually not a problem, as the game will normally autocorrect it. Due to these two factors, however, there are times where the game either believes that the opponent is airborne or the game autocorrects the opponent to be buried in the air. As a result of this, the game puts the opponent into the "pass" state before entering the bury, then immediately attempting to put the opponent into the "fall" state due to being airborne. However, since the opponent has left the buried status by this point, they experience a near-instant "unbury". This sequence of events can easily be replicated on stages like Yggdrasil's Altar when a platform leaves the stage, creating effects akin to the bounce glitch.

Due to how R.O.B.'s down throw buries opponents, it is unaffected by the bounce glitch.

The glitch has very little utility for King K. Rool and is considered to be a fatal flaw in his down throw. However, given that reaction time largely mitigates the frame disadvantage, players often try to use K. Rool's up aerial to catch panic options for a stock, or dash away to catch a landing. Banjo & Kazooie players tend to use it in a similar manner; mainly for juggle setups with their own up aerial, or exploiting the awkward situation made by the throw. Given that their down throw has less lag, it also tends to have a significantly smaller frame disadvantage should the glitch occur.

Isabelle being "bounced" on Yoshi's Story. Isabelle is a fairly commonly bounced character.

Cloud being "bounced" on Lylat Cruise, before K. Rool gets punished after buffering neutral attack.

The most common circumstance where the glitch occurs is with slopes, usually if the throw has momentum beforehand. This happens most frequently on stages such as Castle Siege, Lylat Cruise, Yoshi's Story and Yoshi's Island (Brawl). The instances where a character is "bounced" on slopes are inconsistent. Yoshi's Story specifically can have side-effects with the cloud lift "Randall", where they will be buried on the cloud instead of the edge of the stage. In addition to the slopes, Lylat Cruise can have the glitch occur on the cylinders and platforms as well. It is unknown if waiting or pummeling can alleviate the glitch, with results being inconsistent.

Characters unaffected by this include:

Corrin utilizing a platform drop bounce glitch. Due to Corrin buffering an up aerial in an attempt to mash, this allows King K. Rool to score an up aerial.

Dropping through platforms on specific frames prior to being grabbed can also cause a bounce glitch, though this can also have side-effects. For example, Bayonetta tends to teleport behind King K. Rool[1]. Given that this glitch can be triggered by the opponent, it is a valid counterplay measure to the opponent's bury throws, and as such, it can be considered an advanced technique.

The frame windows in which a platform drop bounce glitch can occur depend on the character. Some, such as Corrin, work at any point where their platform drop animation considers them airborne. Others, such as Marth's, have to be exactly on the frame in which they are considered airborne. In addition, once the opponent is grabbed in this circumstance, no amount of pummeling or waiting will prevent the glitch from occurring, due to now being in a glitched grabbed state. This state is removed once the opponent is either released from the throw or thrown, including from a bounce glitched down throw.

If thrown during their unique extra platform drop frames, Ryu, Ken, and Terry will always trigger a bounce glitch when thrown.

Some characters are unaffected by this, including;

Sephiroth being "bounced", and then getting hit by King K. Rool's back aerial's grounded hitbox while airborne. Why this happens is unknown.

For unknown reasons, Sephiroth, Bayonetta, and Bowser Jr. are noticeably more affected by the bounce glitch than other characters. These characters can be "bounced" on far more stages than usual, including Battlefield[2] and Pokémon Stadium 2's edges, or almost any platform. This is likely due to their unique character properties, such as Bowser Jr.'s Clown Kart mechanics. In these cases, the more momentum a grab carries to the edge, the more likely they are to be "bounced".