This article is about the fighter ability for characters that carry shields. For the universal gameplay mechanic, see Shield.

Hylian Shield redirects here. For the stickers, see List of stickers (The Legend of Zelda series).

In addition to the bubble shield common to all characters, Link, Young Link, Toon Link, and the Hero carry their own personal passive shield while in battle. This shield defends them from projectile attacks while standing still, crouching, or walking.

Link blocking a Fireball with his shield in Super Smash Bros. Ultimate.

Incoming projectiles that hit the shield will deal no damage and simply push the wielder back, dependent on how much damage and knockback it would ordinarily do. Unlike other projectile-countering abilities (like reflectors or the default bubble shield), this shield cannot break and can block any amount of projectiles regardless of power. The only exception to this rule is Link's shield in the original Super Smash Bros., which is only aesthetic and has no effect in gameplay.

In Ultimate, from version 4.0.0 onward, characters who carry shields can shield SDI when blocking a projectile with their shield. 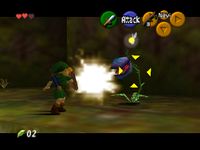 Young Link uses his Deku Shield to block an attack in Ocarina of Time.

Link has always possessed a shield in every The Legend of Zelda game to defend himself against attacks. Depending on the game, it may be an always-active ability so long as Link is standing or walking, or it may have to be raised manually; in either case Link must be facing the attack in order to block it. In some cases, powerful attacks are too much for the shield and may cause Link to stagger or damage him anyway.

The design of each Link's shield is taken from their respective game. In all games, Link carries the Hylian Shield, which debuted in The Legend of Zelda: Ocarina of Time and retains a similar design across incarnations. Young Link uses the Deku Shield from Ocarina of Time (which does not burn against fire, unlike its original counterpart), while Toon Link holds the Hero's Shield from The Legend of Zelda: The Wind Waker.

Link being capable of shifting his shield's position by crouching is reminiscent of Zelda II: The Adventure of Link, where Link can either defend his upper body or lower body by crouching and standing. In addition, one-handed swords in The Legend of Zelda: Ocarina of Time and The Legend of Zelda: Majora's Mask would cause Link to crouch if he shielded without Z-targeting. 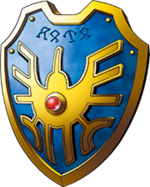 the Shield of Heroes, a recurring item throughout the Dragon Quest series.

Shields have been a recurring piece of armor in the Dragon Quest series since the original game; when equipped, they increase the wielder's defense, reducing any damage taken and occasionally blocking certain attacks altogether. The most powerful shields, such as Erdrick's Shield, are typically only available to the game's hero.

In Smash, the Luminary uses Erdwin's Shield, Erdrick wields the Shield of Heroes (also known as Erdrick's Shield), Solo uses the Zenithian Shield, and Eight uses the Dragovian Shield. Other elements of the shield's functionality, such as being able to shift its position by crouching, are derived from Link's moveset, and by proxy, the Zelda series.