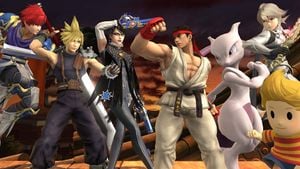 The seven DLC fighters in SSB4 on Suzaku Castle. 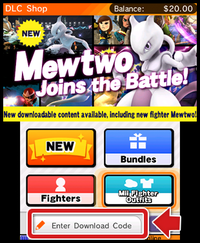 The DLC shop as it appeared in Super Smash Bros. for 3DS after Mewtwo's release.

Updates to the game are downloadable at no extra cost. The game must be updated to the latest version to purchase DLC, which is done automatically after starting the game from the system's main menu. Most updates also adjust game balance and mechanics, while fixing glitches and other errors as well. Change-logs for all updates are available at the links above. Nintendo did not release any detailed information as official announcements.

As with any other game, DLC data gets added via free updates. Completing a transaction to receive DLC is merely a "ticket" to grant access to said content. What this means is that DLC not purchased in an updated version is still technically installed but locked, and thus is accessible indirectly. Content that is locked can be seen and played against with opponents connecting via a system that has DLC paid for (in "With Anyone," "With Friends," and local Nintendo 3DS Versus modes). Without another person with DLC, locked content can still be seen via using amiibo as Figure Players, and saving uploaded or shared replays.

Melee veteran Mewtwo was announced as the very first DLC character in the Super Smash Bros. series during the 50-Fact Extravaganza on October 23rd, 2014. Mewtwo's release date was revealed on April 1st, 2015 during a Nintendo Direct. On April 15th, 2015, Mewtwo became available as a free download to players who registered both versions of SSB4 on Club Nintendo before March 31st, 2015. As of April 28th, 2015, Mewtwo is available for anyone to purchase.

Brawl veteran Lucas was first confirmed to reappear in Super Smash Bros. 4 as a downloadable character alongside the reveal of Mewtwo's release date, during a Nintendo Direct held on April 1st, 2015. He was released on June 14th, 2015. The Smash Ballot, which gave people an opportunity to vote for a new character, was also announced.

Melee veteran Roy was leaked as DLC in data-mining of the 1.0.6 and 1.0.8 updates. He was officially revealed by Masahiro Sakurai during a Nintendo Direct on June 14th, 2015, and released shortly after on the same day.

Newcomer Ryu from Capcom's Street Fighter series was leaked alongside Roy. Similarly, he was officially revealed by Masahiro Sakurai during a Nintendo Direct on June 14th, 2015 and released shortly after on the same day. Ryu comes as a set with the stage Suzaku Castle.

Newcomer Cloud Strife from Square Enix's Final Fantasy VII was announced during a Nintendo Direct on November 12th, 2015 and released on December 15th, 2015. Cloud comes as a set with the stage Midgar.

Newcomer Corrin from Fire Emblem Fates was announced during a Nintendo Direct on December 15th, 2015 and released on February 3rd, 2016. Corrin does not have an exclusive stage, but comes as a set with a music track in both versions; Corrin also comes with exclusive trophies in the 3DS version and two additional music tracks in the Wii U version.

Newcomer Bayonetta from SEGA and PlatinumGames' Bayonetta series was announced during a Nintendo Direct on December 15th, 2015 as the Smash Ballot winner, and released on February 3rd, 2016. Bayonetta comes as a set with the stage Umbra Clock Tower.

A stage based on the Miiverse application found on Wii U and 3DS consoles, which was confirmed during the 50-Fact Extravaganza that it would be added to the Wii U version of SSB4 in an update after release. It was made available for free on June 14th, 2015.

Suzaku Castle comes as a set with Ryu.

The Duck Hunt stage was available in the Wii U version at launch as an unlockable stage. It was added to the 3DS version in a free update.

Midgar comes as a set with Cloud.

Umbra Clock Tower comes as a set with Bayonetta.

The Wii U version of SSB4 supported amiibo at launch, but the 3DS version had the feature added via patch on February 9th.

The 50-Fact Extravaganza confirmed that the Wii U version of SSB4 would contain a special mode that allows players to compete in and host tourneys online, in a similar vein to Mario Kart 8 tournaments, though it would not be ready at release. Another part of this mode is an elimination style tournament mode that bears a close resemblance to that of past Smash games. This type of tourney only begins at set (albeit frequent) times. The mode was later discontinued due to the shutdown of Miiverse.

Additional costumes for the Mii Fighters are available as paid DLC.

The first wave of costumes was among the first available DLC for SSB4 and was released on April 15th, 2015. It features original costumes, and costumes based on the Mega Man, The Legend of Zelda, and Xenoblade Chronicles series.

The second wave of costumes was released alongside characters and stages on June 14th, 2015. It features costumes based on the Mega Man, Animal Crossing, Splatoon, Virtua Fighter, and Tekken series. The Splatoon costumes were also made available as part of a promotion for pre-ordering or purchasing Splatoon at GameStop between May 8th and June 13th, 2015.

The third wave of costumes was released alongside stages and modes on July 31st, 2015. It features original costumes, and costumes based on the Donkey Kong, Fire Emblem, EarthBound, Metroid, and Tales series.

The fourth wave of costumes was released alongside stages on September 30th, 2015. It features original costumes, and costumes based on the Mario, Star Fox, F-Zero, Kid Icarus, and Monster Hunter series.

The fifth wave of costumes was released alongside a character and stage on December 16, 2015. It featured costumes based on the Final Fantasy and Mario series.

The sixth and final wave of costumes was released alongside two characters and a stage on February 3rd, 2016. It features original costumes, and costumes based on the Wario, Sonic, The Mysterious Murasame Castle, and Babylonian Castle Saga series.

Trophies of fighters for All-Star Mode and Classic Mode are included upon purchasing the fighter, as well as additional trophies:

Trophies of Mewtwo are included with the purchase of Mewtwo.

Trophies of Lucas are included with the purchase of Lucas.

Trophies of Roy are included with the purchase of Roy.

Trophies of Street Fighter are included with the purchase of Ryu.

A trophy of a female Inkling from Splatoon can be received by purchasing any of the Inkling Mii Fighter costumes included in DLC Wave 2.

Trophies of Cloud are included with the purchase of Cloud.

Trophies of Corrin are included with the purchase of Corrin.

Trophies of Ryoma and Xander from Fire Emblem Fates are included with the purchase of Corrin on the 3DS version.

The ability to upload replays to YouTube was added.

The ability to upload highlight reels of replays to YouTube was added.

This song from Fire Emblem Fates is included for existing Fire Emblem stages Coliseum and Castle Siege when Corrin is purchased on the Wii U version. Only the remixed version is added to the 3DS version, for use during Smash Run.

DLC bundles are the same price as all their individual pieces of DLC bought separately. This applies both for buying it for one version and buying it for both versions.

Stages can be bought for one version at full price or for both versions discounted. Stages that come bundled with a character cannot be purchased separately. Stages are priced at:

As with characters, downloadable Mii Fighter costumes can be bought for one version at full price or for both versions discounted. These can also be bought individually, or in a bundle that includes all Mii costumes added in a particular update. The first 3 bundles all cost the same. They are priced at:

Also available for purchase are collections that include all DLC released in a particular update. These vary in price depending on the amount of content.