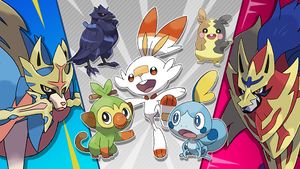 New Galar Region Pokémon Discovered! was a Spirit Board event focused on spirits from Pokémon Sword and Shield. It ran from 6 a.m on November 22, 2019 to 6 a.m. on November 27, 2019 (UTC). During the event, defeating spirits on the Spirit Board which were part of the event awarded more SP than usual.

The spirits for this event were exclusive to it at the time. After February 25, 2020, these spirits became available in the Shop and on the Spirit Board like most other spirits.

Pokémon from the Galar region, the stage for Pokémon Sword and Pokémon Shield, are flocking to the Spirit Board! Four new spirits will appear during this event.

Defeat them in battle to earn more SP than usual. Take a look![1]