SmashWiki enjoys April Fools' Day. To us, it is a day of shenanigans where most rules are optional and the only goal is to have fun.

Any established user is free to participate in the festivities. Note however that while the rules are much more lax, they do still exist. When making an April Fools' edit, apply common sense, and think about whether the page still presents information that it is supposed to, despite the changed wording of the paragraphs you are going to edit. Failure to adhere to these guidelines may result in a block (depending on severity, a warning may be issued first) for the rest of the April Fools' festivities. Attempts to circumvent this block will result in a permanent one. In addition, users that break the rules may find themselves disallowed from participating in future years.

Traditionally, the main page is where the main joke of the wiki is done by the administrators. While the main page itself cannot be edited by other users, some of its constituent templates can be.

Adding fake news items is a simple joke, such as fake Smash Bros. characters being revealed, or fake games being listed in the "upcoming games" section. However, note that simplicity leads to over-saturation, and these sections can end up quite inflated after a time. If the list is already rather large, consider not adding to it any more.

"Did you know" section[edit]

Chances are, this section will be converted to match the main page's theme, but others may add to it as appropriate. As above, it is easy for this to become too large, and discretion is advised.

It is acceptable to make joke edits in the mainspace. However, there are some restrictions on doing so.

Users are free to do almost whatever to their user pages.

Generally, the functionality of the wiki should remain mostly intact. Therefore, no jokes are allowed in templates or categories, and admins may not alter the MediaWiki namespace in ways that disrupt the wiki's functionality.

Generally, the main wiki joke as done by staff is launched between European midnight and American midnight, and can be considered a "go!" signal for other users to begin. In the same way, once the main page is back to normal (probably about 24 hours later), everything else should be put back in order.

Note that users making fools of their own user pages are in general not important enough to be listed here. This is more meant for wiki-wide pranks.

In 2013, it was announced that the wiki would be turning into a French-language wiki. The main page and all its constituent templates were translated to suit. In addition, several of the links were replaced with links to either the Wombo Combo page or the related video.

In 2014, several pranks were pulled by various users:

In 2015, the wiki became SmashRiki in honor of Riki, a character from Xenoblade Chronicles who appears as an Assist Trophy in SSB4. The main page was changed to match Riki's speaking style, and the color scheme changed to Riki's colors.

Due to a Nintendo Direct set to air later in the day, the wiki was put back to normal ahead of schedule, and the news template remained untouched throughout the day.

In 2016, SmashWiki joined the Super Mario Wiki and Pikipedia in announcing a fake Nintendo Cinematic Universe, with "The Smashers" being one of its films. Aside from these pages and typical unusual things being added to the main page and articles, no major stunts were pulled.

PlayStation All-Stars: Battle Royale is the main featured article. No other aesthetics were shown.

The main page is rewritten to be in Toomarian, a reference to a Star Trek episode involving a language (Tamarian) completely composed of memes and references.

Separate from the main joke, several other large-scale jokes were put up on the wiki; most notably, users Aidanzapunk and BaconMastre collaborated to create content for Super Smash Bros. 4 from the Dragon Ball series, including main protagonist Goku as a playable character, and Planet Namek as a stage. Additionally, user Awesomelink234 created a fake playable character page for Shadow the Hedgehog in the then-unnamed Super Smash Bros. for the Nintendo Switch. These pages were uploaded to the mainspace of the wiki, and replicated how other real content pages would look.

The main page is themed after Randall the Cloud, the cloud featured on the Yoshi's Story stage in Super Smash Bros. Melee and Super Smash Bros. Ultimate. The maintenance icons were replaced with a fanmade Pokémon named "Trollbat" (a mashup of the Pokémon Golbat and the Trollface), created in tandem with the SmashWiki's Discord server being themed entirely around an emoji under the same name (and other troll-face emojis based on Kirby and Sonic being added). As with the previous year, several fake fighter pages were made separate from the main joke, including Jiashen C. making a fake fighter page for Waluigi, and Awesomelink234 making another fake fighter page, this time for Jotaro Kujo from JoJo's Bizarre Adventure.

The wiki was themed after Captain Falcon (formatted as CAPTAIN DOUGLAS JAY FALCON), with Captain Falcon being the featured article and all of the text on his page and on the main page capitalized. Several other widespread jokes were made: 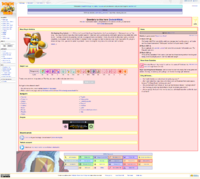 The wiki was renamed to DededeWikiki, with the Main Page and King Dedede's page rewritten to mirror King Dedede's personality and speech style from Kirby: Right Back At Ya!.

Unlike in previous years, users were required to submit their planned pranks to admins for approval beforehand, rather than being free to vandalize the wiki, to cut down on jokes that are low effort and in poor taste, as well as to make cleanup easier and more accountable.

Animation of the news section

The wiki was transformed by "AmDyCo", or "Amusing Dynamic Content", purported to be the next big thing for websites that no longer wished to be boring and static. Every letter on every page (aside from the edit box) had a 7.5% chance to have a random animation applied from 15 choices:

AmDyCo remains available for users to enable at will via Preferences -> Gadgets.

Like with 2021, users were required to submit their planned pranks to admins for approval beforehand, rather than being free to vandalize the wiki, to cut down on jokes that are low effort and in poor taste, as well as to make cleanup easier and more accountable.