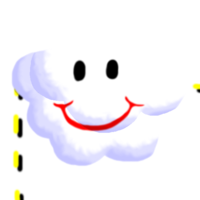 Randolph Thespis Klauwd III, better known as Randall The Cloud or simply Randall, is a railcloud best-known for his starring appearance on the Yoshi's Story stage in Super Smash Bros. Melee.

Randall's father, Randolph Jr., was a high-profile Lakicarrier stationed in World 4-1 in 1985.[1] Junior was highly-touted by his operator, Lakiluke Roundel, for having quick response times and very good elevation control. However, he was wounded in battle and forced to retire, unable to keep pace with his comrades. While he was saddened to step away from his successful career, he wasted no time in using his fame to catch Nuaj Thunderhead, a feisty woman with a stable job behind the scenes in show business.

Randall was born October 16th, 1986. It was immediately apparent that something was not quite right about him; he often showed no reaction to obvious stimuli and preferred to remain stationary well past six months of age. The diagnosis at the time was that he was simply slow, and would catch up by the time he reached school age. This did not occur however, and Randall remained significantly mentally undeveloped to begin his education.

To little surprise, Randall was endlessly teased and tormented by his peers at Stratus Elementary. The primary subject of the jeering was his inability to move in a straight line, making "Random Randall" his most common nickname. Other popular topics included his lack of co-ordination and lack of real friends. Randall did not appear bothered by the treatment at first, possibly because his grasp of language was shaky to begin with. But by the age of eight, he began to show signs of depression, and started strongly resisting going to school - in fact, he would do nothing but wander aimlessly around his room when left to his own devices.

The school recommended giving Randall some help in the form of an older mentor, and it was provided in the form of a Support Ghost known only as "Big Randy". Big Randy had a good track record with other depressed kids of various air- and ghost-like species, though this was his first attempt at working with a disabled child. Randall connected well with Big Randy, and while his disability continued to hinder his grades, his outlook on life turned from negative to neutral. He still largely disliked school and preferred to be alone, and staunchly resisted any form of physical activities.

In February 2000, the Yoshi construction company Shellenboard put out an advertisement for a "top-secret part-time railcloud position"[2]. Railclouds were normally considered a dim career path, with good job stability but little opportunity for fame and fortune, so they expected their turnout to be mostly youngsters and near-retirees.

Randall's parents suggested that Randall, now 13, submit his name for the position. Their hope was that their disabled child holding a part-time job, however simple, would be a great advantage later in life for when it came time to find a real living. Randall did not expect his application to succeed, and didn't particularly want it to because he quite liked having free time outside of school. He was eventually persuaded to proceed with it by convincing him how much more money he would get compared to his allowance; Randall quite enjoyed collecting LEGO sets, which were normally used by his parents as motivation to do homework, and the idea of being able to speed up his collection rate gave him the final imputus to apply.

In April, Shellenboard contacted its shortlist of 20 candidates and explained that they were aiming to hire somewhere between five and eight of them. The competition was not fierce. Most of the candidates were highschool dropouts looking for any gig they could find, and it showed in their boredom during the rail movement demonstrations. Randall, who was initially equally unexcited, discovered that he rather enjoyed following rails - they allowed him to move in a straight line for once, and he had little trouble maintaining a constant speed. He left the event having made a good impression in practice, but he dwelled on how badly he felt he did in the traditional job interview portion.

When Super Smash Bros. Melee was revealed in May,[3] Shellenboard called in its winning candidates to all take turns showing off the Yoshi's Story stage, and once the stage officially opened in the winter they would be scheduled to take turns daily playing the part of the lower moving platform. It quickly became clear that Shellenboard had neglected to account for starshock in their recruitment process. The other five finalists - Sam, Amelia, Satoru, Tobias, and Rose - all floundered when their favoured Smashers boarded them, slowing down or tilting in undesired ways. By contrast, Randall was too disconnected from popular culture to know who most of the Smashers were, and even for those he did know, his focus was on enjoying riding the rail rather than paying attention to whether someone was nearby.

After the three-day demonstration, Shellenboard's chief of operations, Ölef Petalfoot, called a board meeting over what he termed "an alarmingly disappointing showing".[4] None of the company's senior management was happy with the amount of variance the railclouds had showed, and they expected to hear it from their employer in the coming days. They had a few months to act, but they wanted to have a plan now, and it wasn't as if work on the rest of the stage was fully complete. Furthermore, now that the position was now public, they could no longer take more applications without being flooded with incompetents only applying for a chance to be in Smash Bros.

Much discussion later, two plans were formed. Plan A was to offer Randall the railcloud position in full, dropping all the other finalists, while Plan B was to reach out to Verd the Skydragon and replace the railcloud altogether. They weren't particularly happy with either option; they knew Randall was a young teenager and thus unlikely to take a full-time job, while Verd was a loner and his addition would change the stage significantly. But it was felt that "assume the other railclouds will grow into the position" was not a reasonable option.

Once corporate approved the plans, the company had a meeting with Randall and his family a week later to offer him the full-time position and give him a week to think about it. Randall's parents didn't think it was the best idea for him to drop out of school, and told Randall so, but also pointedly said that it was his decision to make.

To everyone's surprise, Randall decided to go for it. He would later admit he couldn't put a finger on exactly why, but it was some combination of "I'm the best at something and should jump on that", "I might never get a real job elsewhere", "I still don't like school all that much", and "I can make even more money". Whatever the reason, Shellenboard was relieved to have their problem solved.

Come November, Randall reported to work without issue. Most of the Smashers didn't notice that the railcloud on the Yoshi's Story stage was now completely predictable until they started re-watching videos of their matches, which they silently appreciated.

Randall greatly enjoyed his position. Some of his peers continued to taunt him as "Random Randall", but this died down once they matured and noticed that the rail allowed him to move very consistently. In fact, the jeering eventually turned around, with those unable to realize Randall's movement pattern now the downtrodden ones. Randall didn't like seeing people get insulted for not noticing, but he didn't know what he could personally do about it.

When Shellenboard was contracted to build a new stage for Super Smash Bros. Brawl, the first thing they did was ask Randall for his ideas. Randall suggested using a Support Ghost. He said it would make for a similar but quite different experience, but the real reason was that he kind of missed Big Randy, who he hadn't seen since he started work, and hoped that he would see the opening. In the end, a rotating shift of Support Ghosts were hired for the Yoshi's Island stage, and while Randall never had the opportunity to visit, he strongly suspects that Big Randy is one of them.

Randall continues to provide railcloud service to the Yoshi's Story stage in the present day, his presence allowing crazy recoveries, zany tricks, and colossal mistakes. Most assume that he has grown bored and only keeps his job out of obligation, but that could not be further from the truth - he's developed a relationship with many of the Smashers over the years, and there's nothing he enjoys more than watching compilation videos of his hijinks on the internet. Things have changed around him, but he hasn't altered his famous timing by a single frame.